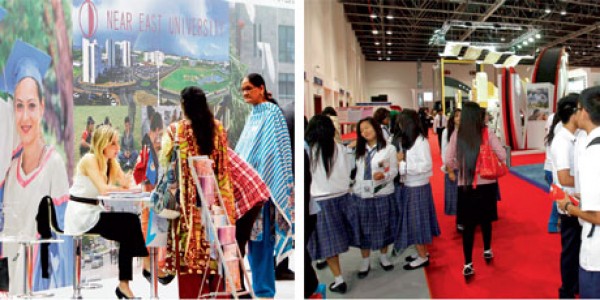 Getex Spring: Catering to various student profiles Staff Reporter / 18 April 2013 Indian national and 19-year-old student of Murdoch University, Sanjana Mani, has her eyes set on Hollywood: “But for now, it is just an alternative. I know I want a career in film production and as far as I know, the opportunities here in the film industry are still limited,” said Mani. Mani was one of the several students who attended the first day of the 25th edition of the Getex Spring 2013 — one of the biggest education and training events in the Middle East and Asia — being held at the Dubai International Convention and Exhibition Centre, running until April 19. More than 400 institutions are taking part in the conference this year, which will showcase over 2,500 academic, vocational and training programmes with organisers expecting over 35,000 visitors. Shaikh Nahyan bin Mubarak Al Nahyan, UAE Minister of Culture, Youth and Community Development inaugurated Getex Spring 2013 on Wednesday. This year however, the exhibition features segments that broadly cater to different student profiles including General and Higher Education, Vocational and Occupational Training, and Professional Development. The first day of the event was attended mostly by Asian expatriate students. Universities from the UK, USA, Canada, Germany, Greece, South Korea, Lebanon, Cyprus, China, UAE, India, Turkey and Pakistan are participating in the exhibition. Courses on offer include Aviation, Hospitality, Medicine, Humanities, and Teaching and Education. Even though a major section of the exhibition is hosting universities from the UAE, several students who spoke to Khaleej Times said they would prefer pursuing their higher studies outside the country. Students like Murtuza Khety (18) and Qasim Nasir (18) said they want to pursue their undergraduate studies in India and Pakistan, respectively, as education is cost-effective in both these countries: “I am looking to do my graduate studies in Business Management from India. Studying here is still expensive and you have more opportunities in India than you do in the UAE,” said Khety. Students and parents checking out the universities and courses on offer on the opening day of Getex Spring 2013 in Dubai on Wednesday. — KT photos by Mukesh Kamal A second year Environmental Studies student from Murdoch University, Trisha Advani, expressed similar concerns: “I want to do my higher studies in the US or Australia. It is not about the cost for me. Career opportunities for Environment Studies are far more superior in these countries. Once things look up in the UAE, I might move back here,” she said. Shaikh Nahyan bin Mubarak pointed out that Getex is gaining strategic significance as one of the most prominent and leading education events at regional and global levels: “The continued success of Getex reflects the UAE’s important role in the global educational domain, boosted by the steadfast support of the country’s leaders to develop the education sector and create an integrated learning environment to encourage creativity and innovation,” he added. Getex is strongly supported by the UAE Ministry of Higher Education and Scientific Research (MOHESR). The General Education segment this year presents school-goers with a gateway of information intelligence on day-scholar, residential/boarding schools and summer camps. The Higher Education segment offers both undergraduate and postgraduate courses that highlight the Middle East as one of the fastest growing student populations. The Vocational Occupational Training segment aims to bridge the divide between education and industry by encouraging learners to acquire skills in specific job profiles, empowering them to quickly enter the workforce and gain career independence. dhanusha@khaleejtimes.com