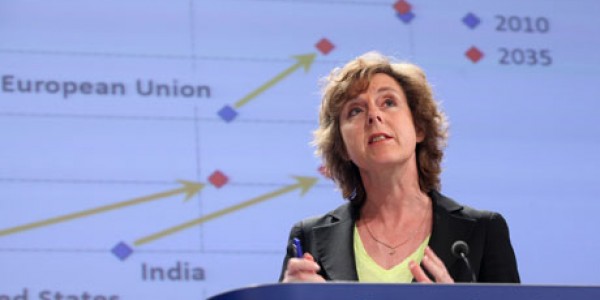 Connie Hedegaard’s attempts to introduce longer-term reforms will face fierce opposition from a powerful business lobby Fiona Harvey in Brussels guardian.co.uk , Wednesday 17 April 2013 17.43 BS Connie Hedegaard, EU commissioner for climate action, at a press conference on a 2030 framework for EU climate change and energy policies. Photograph: Etienne Ansotte/Shimera/EU Press office Europe ‘s climate chief vowed on Wednesday to fight on to save the EU’s flagship environmental policy, the emissions trading system (ETS), after a serious blow on Tuesday when MEPs rejected reforms aimed at repairing the ailing system . MEPs voted 334 against to 315 in favour of “backloading” the market – a proposal aimed to reverse the plummeting price of carbon that has resulted from a surplus of permits in the ETS market – leading the price of carbon to fall by almost half to under €3 on Tuesday. Connie Hedegaard, EU commissioner for climate action, said: “We are preparing structural [longer-term reforms]. We will have new meetings for stakeholders, in parallel with an impact assessment. We are preparing an initiative.” The proposals include measures to restrict rights to carbon permits under the system, and to allow for reviews of the number of permits companies receive for free. Phil Hogan, the Irish environment minister who holds responsibility for the portfolio under the Irish presidency, said: “We are not prepared to allow this issue to die. We have a working party, and we will see what we have to do to put [this issue] up to people in a democratic process.” These attempts will face fierce opposition, however, from a powerful business lobby that has opposed the penalties on carbon dioxide emissions that Europe has sought to impose, in order to tackle climate change . The EU ETS, which began in 2005 and covers the majority of the EU’s energy-intensive industries, is one of only two major carbon dioxide trading systems in the world, intended to cut emissions by putting a price on carbon. The vote by the European parliament to throw out reform proposals was seen by analysts and traders as a potentially fatal blow. Much more is at stake than the EU’s own emissions. A breakdown of the scheme, which is the cornerstone of the European commission ‘s efforts to tackle global warming, would severely damage Europe’s reputation as a global leader on climate issues and diminish the bloc’s clout in ongoing international climate change negotiations aimed at replacing the 1997 Kyoto protocol . Mechanisms such as emissions trading are viewed as essential to force countries and businesses to cut their greenhouse gases, at a time when global emissions are still rising strongly despite ever more stark warnings from scientists. Hedegaard said the commission had already put in train a variety of proposals that would require far-reaching structural reform to the trading system. Under the ETS, energy intensive industries are allocated or required to purchase carbon permits to cover the emissions they produce. The resulting penalty on carbon emissions is supposed to act as an incentive for companies to become more efficient and invest in cleaner technologies, such as renewable energy. But the system has been troubled since soon after its inception, when it was found that member states had allocated far too many free carbon permits to their industries, resulting in a crash in the carbon price. Permit prices recovered when the rules were tightened, but that was in good economic times – when recession struck from 2008-09, many companies were producing far less while still receiving mountains of free permits. That resulted in a massive surplus of permits in a market that relies on scarcity for its very existence – the resulting price of carbon has been so low, at a few euros per tonne, that it provides no incentive for businesses to change their behaviour. The reforms that were rejected on Tuesday would have shored up the price of carbon, by postponing planned auctions of 900m new permits. But some business groupings lobbied hard against the proposals, which they said would impose costs on companies that overseas competitors do not face, and the vote was narrowly lost – in part because a number of the UK’s Tory MEPs rebelled against David Cameron’s party line. For carbon traders and campaigners, the MEPs’ rejection of “backloading” – the postponement, not cancellation, of permit auctions – was a disaster. Stig Schjølset, head of EU carbon analysis at Thomson Reuters Point Carbon, said the vote would “make EU ETS irrelevant as an emissions reduction tool for many years to come” and that it was “very unlikely that any political intervention in the scheme will be agreed during the third phase from 2013 to 2020”. As a result, he predicted the price of carbon would not rise much above its current €3s and could fall again before 2020. BusinessEurope, a business group that spearheaded the lobbying of MEPs to reject the shorting up of the carbon market, said its members had been “unanimous” in opposing backloading. However, other business groupings have disagreed, including the CBI which supports shoring up the EU’s carbon price. Milton Catelin, chief executive of the World Coal Association, called the European parliament vote “a triumph of common sense and balanced policy”.