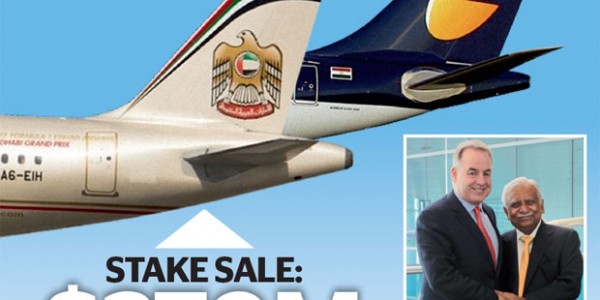 Etihad and Jet Airways seal big deal Issac John in Dubai and  Nithin Belle in Mumbai / 25 April 2013 Etihad Airways, the UAE national carrier, has agreed to acquire a 24 per cent stake in India’s Jet Airways for $379 million, the airlines announced on Wednesday. The long expected landmark deal has set the stage for the struggling Jet Airways to become the first beneficiary of a key policy change that allowed foreign airlines to buy up to 49 per cent in Indian carriers. “Etihad Airways’ wider overall commitment to Jet Airways includes the injection of $220 million to create and strengthen a wide-ranging partnership between the two carriers,” Etihad said in a statement. As part of this, Etihad paid $70 million to acquire three pairs of Heathrow slots of Jet Airways through a sale and lease back agreement announced on February 27. Jet continues to operate flights to London utilising these slots. Besides, an amount of $150 million will be invested by Etihad Airways by way of a majority equity investment in Jet Airways’ frequent flyer programme “Jet Privilege”, subject to appropriate regulatory and corporate approvals and final commercial agreements which are expected to be completed within the next six months, Etihad said. Etihad Airways President and Chief Executive Officer, James Hogan, and the Chairman of Jet Airways, Naresh Goyal, unveiled details of the deal that is expected to have far reaching impact on Indian civil aviation sector. “We are pleased to have reached this significant stage in India with Jet Airways and are certain the partnership will bring significant benefits and opportunities for global growth to both airlines. “It is expected to bring immediate revenue growth and cost synergy opportunities, with our initial estimates of a contribution of several hundred million dollars for both airlines over the next five years. “The Indian market is fundamental to our business model of organic growth partnerships and equity investments. This deal will allow us to compete more effectively in one of the largest and fastest-growing markets in the world.” Etihad Airways’ investment in Jet Airways follows the minority equity stakes taken by the Abu Dhabi-based airline in airberlin, Air Seychelles, Virgin Australia and Aer Lingus over the past 12 months. Speaking to Khaleej Times recently at the launch of Etihad’s inaugural flight to Washington DC, Hogan said profitability was the key factor in his carrier’s organic growth partnerships and equity investments strategy. Ruling out any move to revive talks with Kingfisher Airline, another embattled Indian carrier, Hogan hinted at increasing Etihad stake in Irish carrier Aer Lingus from the current three per cent as it seeks to expand its operations to 100 destinations from the current 86 global cities. Earlier on Wednesday, Jet Airways, India’s largest airline by market share, said in a brief statement to the stock exchange that its board approved the allotment to Etihad of 27.3 million shares at 754.74 rupees each on a preferential basis. Naresh Goyal thanked the Indian government, especially the ministries of aviation, commerce and industry and finance, “for having the foresight to introduce the historic reform of allowing FDI into civil aviation in India”. Infusion of FDI in the domestic sector will result in the improvement of the economics of aviation, grow traffic at Indian airports and create job opportunities, he added. “I am extremely happy to be in a partnership with an airline that shares our customer-centric operational philosophy and ethos. I have no doubt that this partnership with Etihad Airways is a win-win situation for all our stakeholders, especially our guests, who will now have access to a much expanded global network.” The transaction further strengthens the balance sheet of Jet Airways and, more importantly, underpins future revenue streams, which will accelerate our return to sustainable profitability and liquidity, noted Goyal. Following the deal, the two airlines will gradually expand existing operations and introduce new routes between India and Abu Dhabi, providing an ever wider choice to the travelling public. They will combine their network of 140 destinations, with Jet Airways establishing a Gulf gateway in Abu Dhabi and expanding its reach through Etihad Airways’ growing global network. Passengers from 23 cities in India will benefit from direct connections to international destinations. New flights from Jet Airways’ home hubs and metro airports will further strengthen its current operations from these airports. Jet Airways aims to develop Delhi and Mumbai airports as its primary home hubs and connecting them to Asian, European and other regions. A key component of the wide-ranging partnership is expanded code-sharing on flights with passengers benefiting from reciprocal ‘earn-and-burn’ rights on the airlines’ frequent flyer programmes. The proposed codeshare expansion will significantly enable Etihad Airways to tap into India’s rapidly growing travel market, providing additional passenger traffic to Etihad Airways’ Middle Eastern, North American and European destinations, and give Jet Airways passengers from various cities access to an expanded network. According to a Jet Airways spokesperson, current estimates predict the size of the Indian market to grow to 42 million travellers over the next five years at a rate of 10 per cent per year, while the Indian middle class, which provides the majority of air travel demand, is forecast to grow by 200 million, over the next eight years. Etihad Airways currently flies to nine Indian destinations including Delhi, Chennai, Mumbai, Kozhikode, Thiruvananthapuram, Hyderabad, Bangalore, Ahmedabad and Kochi, with a total of 59 flights per week. The partnership will also help drive a significant increase in traffic growth through Abu Dhabi International Airport, as well as Jet Airways’ hubs of Mumbai and Delhi international airports. Key benefits for both airlines will flow from synergies and cost savings in areas, including fleet acquisition, maintenance, product development and training. news@khaleejtimes.com Taylor Scott International