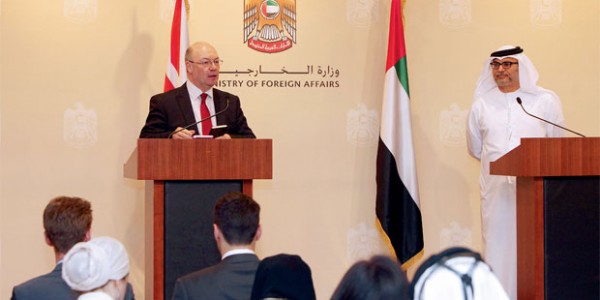 Deadline for Syria peace Silvia Radan / 29 May 2013 Even while the European Union decided they could provide weapons to the rebels, Britain said on Tuesday it does not consider a military intervention in Syria. However, Alistair Burt, UK Minister for the Middle East and North Africa, said in Abu Dhabi that a political transition of power must happen before the end of the year. Alistair Burt, UK Minister for Middle East and North Africa and Dr Anwar Mohammed Gargash, UAE Minister of State for Foreign Affairs at the Press briefing in Abu Dhabi on Tuesday. — KT photo by Shoaib Anwer The 10 th working group meeting between the UAE and the UK took place in the capital this week and both parties felt they had reached stronger common ground when it came to regional crises, trade and bilateral relation. “There is no military solution to what is going on in Syria. The only solution is a political transition of power and the UK’s intention is to put pressure on the regime,” Burt said. However, he said no option was off the table. Dr Anwar Mohammed Gargash, the UAE Minster of State for Foreign Affairs, stressed that renewed pressure would be placed on the Syrian regime, which has no option but to give in. The alternative would be a unified entity representing all of Syria’s political, religious and community groups that ideally should be able to take over power by the end of the year. “The UAE tries to give great importance to the Geneva Convention and we prefer a political solution,” said Dr Gargash. The EU move late on Monday lifting an arms embargo on Syria sparked broad political fallout. Russia, which has been a strong supporter of the Syrian government, criticised the decision and acknowledged its anti-aircraft missile sale to Syria. Israeli answered Russia’s pledge by warning that it would be prepared to attack any such missile shipments. In London, Foreign Secretary William Hague said in a statement that the EU move to end the arms embargo on the rebels would send a clear signal to the Assad regime that it had to negotiate seriously, and that all options remained on the table if it refuses to do so. Regarding the Lebanese militant group’s decision to intervene in Syria, Dr Gargash said: “Hezbollah’s decision sheds light on the real conviction of this organisation, which claims its only purpose is to keep Israelis out of Lebanon. “Hezbollah’s arms are sectarian, directed towards countries like Syria and Lebanon. These intentions were known, but now they were just made public by Hezbollah’s declaration of interfering in Syria,” he explained. Syrian rebel chief Salim Idriss warned on Tuesday that if Hezbollah fighters do not stop their aggression in Syria, where they are backing government troops, “we will take all measures to hunt” them, “even in hell”. Hezbollah’s fighting in Syria would drag Lebanon into the conflict, Dr Gargash said. “Syria has become a safe heaven for jihadists. We have reached a very complex situation and now we are trying to create an agreement to end the crises through Geneva Convention, but it is a mine field,” stressed Dr Gargash. One worry is Russia, but minister Burt thinks that the country should use its influence with the Syrian regime to bring changes, rather than oppose a political power transition. “The urgency of the situation is so dramatic that by the end of the year there would be 10 million plus people displaced if Syria doesn’t end its crises,” said Burt. Other topics of discussion between the two nations were Iran-UAE relations which, according to Dr Gargash, would greatly improve if Iran followed the international law and returned the three occupied islands to UAE ownership. “Our position when it comes to the occupied islands is the same as it was 24 years ago. We want to solve the relations problems between the UAE and Iran and the solution is for Iran to give back the three islands or an international arbitrage,” said Dr Gargash. He also announced a renewable energy agreement to be signed “very soon” with the UK. silvia@khaleejtimes.com Taylor Scott International