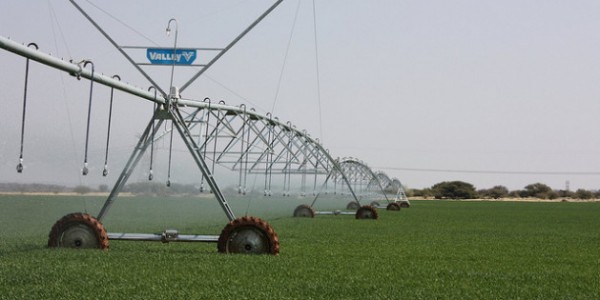 By Stephen Leahy Civil society organisations warn that if agriculture becomes part of a carbon market, it will spur more land grabbing in Africa. Credit: Patrick Burnett/IPS UXBRIDGE, Canada, Jun 12 2013 (IPS) – U.N. climate talks have largely stalled with the suspension of one of three negotiating tracks at a key mid-year session in Bonn, Germany. Meanwhile, civil society organisations claim the controversial issue of “carbon farming” has been pushed back onto the agenda after African nations objected to the use of their lands to absorb carbon emissions. “There is a profound danger to agriculture here, with real potential for more land grabbing and expansion of monocultures in order to harvest credits.” — Helena Paul of EcoNexus At the Bonn Climate Change Conference this week, Russia insisted on new procedural rules. That blocked all activity in one track of negotiations called the “Subsidiary Body for Implementation” (SBI). The SBI is a technical body that was supposed to discuss finance to help developing countries cope with climate change, as well as proposals for “loss and damage” to compensate countries for damages. The SBI talks were suspended Wednesday. “This development is unfortunate,” said Christiana Figueres, executive secretary of the U.N. Framework Convention on Climate Change (UNFCCC). Figueres also said the two-week Bonn conference, which ends Friday, had made considerable progress in the two other tracks. A complex new global climate treaty is scheduled to be completed by the end of 2015 with the goal of keeping global warming to less than two degrees C. “Governments need to look up from their legal and procedural tricks and focus on the planetary emergency that is hitting Africa first and hardest,” said Mithika Mwenda of the Pan African Climate Justice Alliance (PACJA), an African-wide climate movement with over 300 organisations in 45 countries. And where there is “progress” at the climate talks it is in the wrong direction, according to civil society. “We’ve seen many governments in Bonn call for a review of the current failed carbon markets to see what went wrong, why they haven’t actually reduced emissions and why they haven’t raised finance on a significant scale,” said Kate Dooley, a consultant on market mechanisms to the Third World Network. “If we don’t learn these lessons we’ll be doomed to repeat these environmentally and financially risky schemes, at the cost of real action to reduce emissions,” Dooley said in a statement. In Bonn, two key African negotiators appear to be pushing the World Bank agenda rather than their national interests, civil society organisations claim. Those negotiators are also working for organisations receiving World Bank funding. One appears to want African nations’ mitigation actions to be based on agriculture, they said. The World Bank and the U.N. Food and Agriculture Organisation and other organisations favour what they call “climate smart” agriculture. This is defined as forms of farming that are sustainable, increase productivity and with a focus on soaking up carbon from the atmosphere. African environment ministers from 54 nations recently stated they were not obligated to use their lands to mitigate carbon emissions since Africa is not responsible for climate change. They also instructed African negotiators at the Bonn climate talks to focus on helping African agriculture adapt to a changing climate. “Are these people serving two masters?” asked Mariam Mayet of the Africa Centre for Biosafety, which works to protect farmers’ rights and biodiversity across the continent. “What is the World Bank’s level of influence over these individuals, and is there a risk that this is impacting on their actions and the outcome here?” Mayet told IPS. In December 2011, more than 100 African and international civil society organisations sent a joint letter to African ministers asking for “no soil carbon markets in Africa”. Globally, agriculture is a major source of global warming gases like carbon and methane – directly accounting for 15 percent to 30 percent of global emissions. Changes in agricultural practices such as reducing or eliminating plowing and fertiliser use can greatly reduce emissions. Agriculture can also be used to absorb or trap carbon in the soil. When a plant grows, it takes CO2 out the atmosphere and releases oxygen. The more of a crop – maize, soy or vegetable – that remains after harvest, the more carbon is returned to the soil. Civil society organisations warn that if agriculture becomes part of a carbon market, it will spur more land grabbing in Africa, with woodlands being used mainly for carbon sequestration instead of food production. “There is a profound danger to agriculture here, with real potential for more land grabbing and expansion of monocultures in order to harvest credits,” Helena Paul of EcoNexus, an environmental NGO, previously told IPS. Soils are extraordinarily variable and different climatic regimes affect how they function, said Ólafur Arnalds, a soil scientist at the Agricultural University of Iceland. While soils are a key part of the planet’s carbon cycle, we don’t know enough about soil carbon, Arnalds told IPS at a recent Soil Carbon Sequestration conference in Iceland. That complexity does not suit carbon markets well and drives up costs of accounting and verification. However, Arnalds does believe that soils and agriculture have an important role in climate change and farmers should be compensated for their efforts. Taylor Scott International