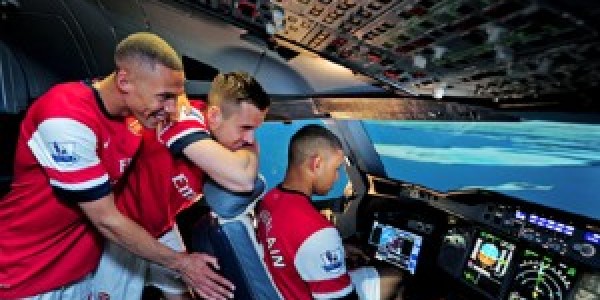 Three Premier League footballers were given a special challenge when they visited the impressive Emirates Aviation College in Dubai.Arsenal trio Kieran Gibbs, Carl Jenkinson and Alex Oxlade-Chamberlain were asked to land one of the airline's huge A380 planes at Dubai International Airport.Of course, the talented youngsters were not tasked with landing an actual plane, but they did take to the cockpit of an incredibly realistic flight simulator.Emirates' chief A380 instructor Warren Coles was on hand to guide the footballers through the mock descent into the second busiest airport on earth and it was Oxlade-Chamberlain who was first to take control.The 19-year-old England striker managed to bring the plane down smoothly, although his teammate Gibbs was not quite so astute.”I don't think I'll be a pilot anytime soon,” the fullback remarked after a somewhat hairy landing.His effort was still better than Jenkinson's, who managed to bounce the A380 down the runway after getting a little carried away.”I was more excited to be honest going in there, but then, when I was actually in the seat, I was yeah quite nervous to be honest,” the 21-year-old former Charlton Athletic defender commented.Arsenal have a sponsorship agreement with Emirates and the three stars also held a special training session at a soccer school during their stay in Dubai.Emirates is one of the fastest growing airlines on earth and the firm recently unveiled a brand new training centre at the Dubai Silicon Oasis.The state-of-the-art facility was launched by the company's chairman and chief executive His Highness Sheikh Ahmed bin Saeed Al Maktoum and the event was attended by customers and officials from all over the world.It is the latest joint venture between Emirates and flight simulator specialist CAE, who have been working together for a decade. The two organisations have invested a total of US$260 million (£172.7 million) in the region to date and the partnership is really blossoming. Taylor Scott International