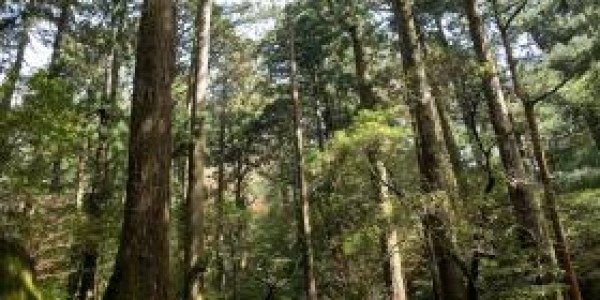 By ERICA PETERSON Enlarge image Credit Σ64 / Wikimedia Commons When we talk about exporting energy sources to other countries, the conversation tends to center on fossil fuels. Here in Kentucky, it’s all about coal, and even as the nation cuts back on coal burning, many mines are hoping that burgeoning economies in Asia will help fill in the economic gaps. But the BBC Newshour had an interesting story this morning about another fuel that America is exporting: wood. Trees that are grown in the Southeast are being sent to Europe to fuel biomass boilers, and there’s a debate about whether that process actually helps the European Union further its stated goals of reducing carbon dioxide emissions. The EU has a renewable energy standard, mandating that 20 percent of energy has to come from renewable sources. And biomass–and wood-burning–technically fits that definition. As the BBC reports , some of the trees being turned into wood pellets and exported to the United Kingdom come from tree plantations. These farms mainly raise trees for timber, but the twisted trees that don’t make good boards can be ground up and turned into pellets. But BBC Correspondent Roger Harrabin reports that  if the market grows enough, it could attract wood from other places. I drove with environmentalists at dawn to a gorgeous swamp forest in North Carolina. The birdsong was entrancing, and a scarce prothonatory warbler – known as the swamp canary – danced before our TV lens. The wood fuel industry has not advertised that it also takes trees from natural forests like this to boil kettles in Britain – but that’s what happens. Most of the swamp forests in south-east US are in the hands of small private landowners and they face few restrictions on what they do with their assets. And environmentalists argue that the ultimate irony is that a renewable energy standard that was meant to help slow and reduce the effects of climate change could end up contributing to the problem. The British government will shortly announce its rules for the sustainability of “biomass” burning for power. It will set a standard for emissions created from the cutting, drying and shipping and timber but it will make a working assumption that burning the wood has nil CO2 emissions as new trees will suck up the CO2 emitted by wood burning. Critics say this is simplistic as it fails to recognise that it will take maybe 50 years for new trees to absorb the CO2, whilst politicians agree that emissions need to be cut immediately to prevent carbon over-heating the planet. It also fails to account for the fact that in the US the forest stock has been increasing and this process offsets the growth in carbon emissions from homes and industry. Burning American trees in the UK reduces America’s “carbon sink”. Foresters argue that this doesn’t matter much as long as the total biomass sent for export is no greater than the wood used in a single large pulp mill. But these numbers will grow fast. Plus, whenever anything is exported via ocean liner, there are carbon emissions associated with  transportation. While Louisville is lacking the trees it needs (and this fact landed the city the #2 spot on Grist’s list of the top 10 American cities most “screwed by climate change”), Kentucky has a lot of forest land. Some groups like the Kentucky Sustainable Energy Alliance say biomass could be one way to help move the state away from coal (but it’s important to note that the term “biomass” could mean anything from mature trees to switchgrass ). Meanwhile, the Mountain Association for Community Economic Development has a program that incentivizes forest owners to maintain their forests by paying them for all of the carbon dioxide their trees sequester. Taylor Scott International