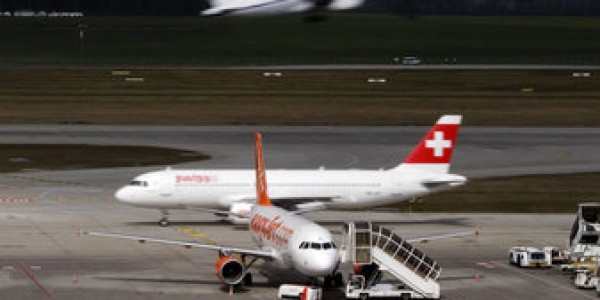 By CHRISTOPHER F. SCHUETZE Fabrice Coffrini/Agence France-Presse — Getty Images Geneva International Airport. Airline travel is thought to cause 2 percent to 3 percent of the world’s carbon emissions. Last week, airlines called on the aviation authorities to find a way to curb emissions after 2020.Despite the unpopularity of a European aviation carbon emission tax, the world’s airlines are ready to discuss global measures. The announcement , which calls on the International Civil Aviation Organization, the civilian sky’s U.N. regulating body, to adopt an across-the-board, market-based mechanism to offset emissions, was made during the International Air Transport Association’s 69 th annual meeting, in Cape Town. “We can give them a direction we want them to go,” said Tony Tyler, the head of the association, about the recommendations to the governing body in a video statement . The International Civil Aviation Organization hopes to steer governments away from a patchwork of national rules and toward a single, global, market-based mechanism. “Such a patchwork would be an administrative nightmare,” said Paul Steele, the association’s environmental director at a news conference . The industry group represents 240 of the world’s airlines, which operate 84 percent of all civilian flights. The association has called for environmental standards before, but this is the first time it has called for comprehensive binding regulations. Since 2010, the association has been in favor of a 1.5 percent annual increase in fuel efficiency from 2010 to 2020, with carbon neutral growth by 2020. By 2050, the association wants net emissions cut by 50 percent from 2005 levels. As Rendezvous reported last year , Europe and the rest of the world have been in disagreement over whether foreign carriers should take part in the European Emission Trading System when landing at European destinations. A European Union rule, in place since last year, would have taxed carbon emissions on flights terminating or originating in Europe, even for non-European airlines. Last summer, a group of non-European nations met in Washington to condemn such taxation. Then President Barack Obama disappointed environmentalists when he signed a bill into law that actually prohibits United States airlines from paying the tax when landing in Europe, in contravention of international law. Earlier this year, the European Union announced a “stopping of the clock” in its demand for non-European carriers to participate in its emission trading program. At the time, Connie Hedegaard, the E.U. commissioner for climate action, described the move as allowing the rest of world to catch up. The air association’s most recent announcement was welcomed in Brussels. “It is a very strong message that the airline industry seems ready to support a single global market-based measure to keep their emissions in check,” Ms. Hedegaard said in a statement sent to reporters last week. “The E.U. is ready,” she said. Airline travel is thought to cause 2 percent to 3 percent of the world’s carbon emissions. According to a National Geographic report , an average passenger airplane burns four liters, or a little more than a gallon, of jet fuel for each kilometer each a passenger flies. This number is already a 40 percent improvement over jet fuel efficiency in 2000. Though the number of flights may still be climbing (Rendezvous reported last year on the one billionth international arrival in 2012), new planes are becoming increasingly fuel-efficient. “This is a responsible industry. We are the only industry in the world that has set itself clear targets in terms of emission standards,” said Mr. Tyler, according to the video statement. Taylor Scott International