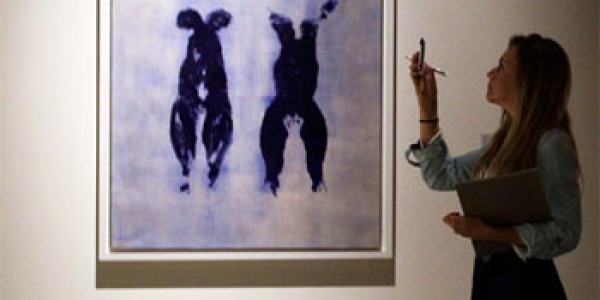 A peek into Louvre Abu Dhabi collection (AP) / 21 April 2013 Abu Dhabi’s new branch of the Louvre considers no artistic subject to be off limits but will not “shock for the sake of shocking”, a top overseer said on Tuesday. She spoke as the museum prepared to open a sample of its growing collection — including works by Picasso and Gaugin — to public view, shedding light on the choices the city makes as it expands its international profile. The Abu Dhabi Louvre is building its collection to open in 2015, one of the centerpieces of a planned cultural district that will also include a branch of New York’s Guggenheim and a national museum. Laurence Des Cars, curatorial director of Agence France-Museums, said there are no “sensitive issues” that are out of bounds. She spoke to reporters during an early viewing of 130 works acquired for the future museum, ranging from ancient Persian artifacts to twentieth century paintings.  The works include a 1940 primitive-style painting by French artist Yves Klein, and a 13 th century North African wood carving of an anatomically correct man. An illuminated medieval Holy Quran from Damascus shared a display case with 14 th century European diptycht. Des Cars, whose agency is part of a cultural exchange between Paris’ Louvre and Abu Dhabi, said the goal of the new collection is similar to the globe-spanning collections of the great museums of the late 18 th century in Europe: to seek cultural connections as well as rifts and misperceptions. “We are really talking about the same questions here,” she said. “But we will approach it in our globalised time.” Museum officials gave few details of the process of buying the collection on behalf of Abu Dhabi, saying only that it was through “normal channels” such as private collectors, galleries and auctions. Among the more modern acquisitions are works from famed impressionists Paul Gaugin and Edouard Manet, the 1928 ink-and-collage Portrait of a Lady by Pablo Picasso and mural-size abstract panels by American-born Cy Twombly. Early photographs include an 1843 daguerreotype of a veiled Egyptian woman and an 1853 image by British photographer Roger Fenton entitled Pasha and Bedouin. Abu Dhabi hopes to open its cultural district in 2015. Taylor Scott International