60% of Emirati borrowers use the money to buy cars 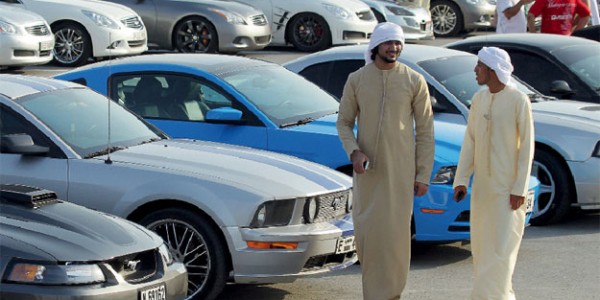 60% of Emirati borrowers use the money to buy cars Haseeb Haider / 7 June 2013 An overwhelming majority of 60 per cent of the Emiratis in Abu Dhabi, who borrowed money, in the first quarter of the year, said in a survey they spent it to purchase a car. A whopping majority of 58.4 per cent Emiratis in Abu Dhabi had borrowed money in the first quarter of the year, says the National Family Status survey conducted in January-March period of 2013 and released by Abu Dhabi Department of Economic Development. The survey found that 60 per cent of Emiratis spent their loans on buying cars, 25 per cent on building a new home, while 12 per cent spent on tying the knot. Three per cent spent on holidays abroad, according to the survey. The survey reinforces the consumer confidence which is on the rise in the country. Syed Hamayun Alam, AGM at Abu Dhabi-based Al Masaood Automobiles,  said: “Consumer confidence has only grown in the country, in recent years, which is reflected  by the survey also.” The total industry volume which means the total car sales in the country, he said was expected to grow 8 per cent year-on-year to 350,000 cars in 2013. A spokesman for Lulu Group, one of the largest chains of hypermarkets in the GCC, said the survey indicates the rising consumer spending. The retail group was projecting 15-20 per cent year-on-year growth in the sales of IT, telecommunications and home entertainment products, which includes mobile phones, iPads, tablets, television sets and other electronic gadgets.  According to the survey each family in Abu Dhabi have a landline and they have five mobile phones, on average. The average landline phone bill during the three months preceding amounted to Dh919, whereas mobile phone bill was Dh4,414. About 32 per cent of heads of families changed their mobile phones during the three months which preceded the survey. The general price index in Abu Dhabi during the first quarter of 2013, scored 74 points, one point higher year-on-year, reflecting an increasing national families sense of the substantial rise in prices of food commodities in March 2013. The survey coincided with the findings of the consumer price index opinion polls conducted by the Statistics Center-Abu Dhabi, as the consumer price index for food group went up to 138.41 points during the March 2013 compared to 137.6 in March 2012. The consumer confidence index showed improvement in the value of the sub-indicator (for citizens) concerning long-term consumer goods which grew two points to 119.6 points. On an average two persons in an Emirati family work and 41.3 per cent of them have at least one person with additional source of income. The average monthly expenditure for the three months prior to the survey rose 25 per cent to Dh26,393 compared to Dh21,014  in the same period a year ago. The money was used to buy   food, drink and tobacco; and housing rental, water, electricity, gas, telecommunications, furniture, maintenance, personal service and other household supplies accounted for 45 per cent of total spending on average, showing a decline by ten per cent, which is normal and in line with drop in rents after the global financial crisis, and the drop in consumer price index during the current period. In the “Household Income and Expenditure Survey 2007-2008” in Abu Dhabi, 55 per cent of the monthly expenditure went on these items. haseeb@khaleejtimes.com Taylor Scott International