Youth Spot: Breaking down the barriers 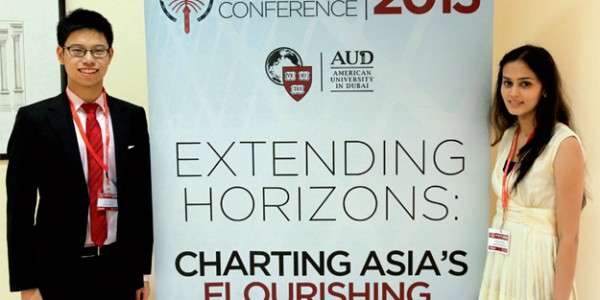 Youth Spot: Breaking down the barriers Dhanusha Gokulan / 25 August 2013 For someone who has not been to any country in the Middle East, clichés about the cultural workings of the place may be natural. Dubai, according to a handful of international students, is impressive, overwhelming, full of high-rises, and “slightly opulent”. Student delegates attending the HPAIR Asia Conference at the American University in Dubai.— KT photo by Mukesh Kamal However, three days into the Harvard Project for Asian and International Relations (HPAIR) being held here, 23-year-old Korean national Soyoung Lee said that the experience of being part of the five-day student-run conference, broke several of those prejudices that were previously formed in her mind. The Korea University student majoring in finance, was on her first visit to the Middle East. “You would assume that people here act differently or are generally biased one way or the other. You read about the political crises, the Arab Spring, and several other problems in the region. But being in Dubai sort of broke several prejudices that I had about the region in general. People here seem so much more casual,” said Lee. Jointly hosted by the American University in Dubai and Harvard University, this is the first time that the HPAIR is being held in the Middle East since its inception in 1992 in Taipei in Taiwan. Students at the American University in Dubai won the bid to host the conference, which opened on Thursday amidst a ceremony with almost 500 schools from 54 countries, last year. Prominent speakers shed light on the question of Asia’s increasing impact on the world. Together, they partake in dialogue bridging global perspectives through plenaries, seminars, and workshops by more than 150 speakers from the Middle East and other parts of the world. One of the biggest student-run conferences in the world, it has been previously hosted in cities such as Singapore, Tokyo, Mumbai, Kuala Lampur, Sydney, Shanghai, Seoul, and Beijing.   ‘Not a very challenging environment’ Apart from panel discussions and speaker sessions, a career fair was also hosted for the students on Saturday. Most students Khaleej Times caught up with said the inter-cultural atmosphere made the exchange of dialogue healthily challenging. However, they said they found Dubai overwhelming, slightly opulent, and far too fancy for their standards. Though some of the international delegates were really impressed with the high standards in Dubai, they said that they would not like to kick-start their career here. Lee, and Filipino national and De La Salle University student Meg Lindt Olea, 20, said Dubai did not provide a very challenging platform for their talents. “I might eventually come to Dubai looking for international prospects, but I would not look to start my career here,” said Lee. Hongjun Wang, the chief catalyst at the Singapore-based startup The Art of Taking Personal Responsibility (TAOTPR) and one of the speakers at the conference said: “I think part of my work is relevant to the region.”   ‘Cultural Diversity,   biggest asset’ Student executive directors of Harvard University and AUD said cultural exchange helped dispel cultural prejudices. “Students nowadays attend conferences all across the world. What the world needs…is a bridge between the East and West,” said AUD student organising committee executive director Krisha Mehta. The third year finance student said: “On a global platform we have a lot of talk about the Middle East going on, especially about the opportunities available and challenges being faced by the people here. There are a wide variety of topics and controversies prominent in the western media that we have tried to highlight here at the conference it self.” Harvard University student organising committee executive director Willy Hoang said involving youth in development dialogue was critical to “inclusive growth and sustainability”. “Me and my team, we felt that it was time that HPAIR itself identify Middle East as part of Asia. By bringing it here, it opened a lot of doors for discussions.” Abdul Basit Al Janahi, CEO of Dubai SME, the agency of Dubai’s Department of Economic Development mandated to develop the small and medium enterprise sector, was a keynote speaker at the conference. “At Dubai SME we try to ensure youth participation in economic and social development through entrepreneurship promotion. We are particularly delighted to be part of HPAIR 2013 since it is being held in a region where a sizeable youth population is redefining growth strategies.” HPAIR 2013 also includes tours of Dubai, a career fair, university day, gala dinner, international night, and entertainment night. – dhanusha@khaleejtimes.com Taylor Scott International