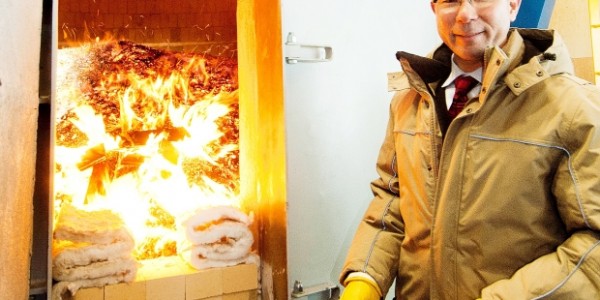 University of Northern British Columbia president George Iwama in front of the Nexterra biomass gasification system installed at UNBC, which is designed to replace 85 per cent of the natural gas consumed on campus. Waste wood from logging and forest fire mitigation could replace 30 to 50 per cent of the fossil fuel used in B.C. and significantly reduce carbon emissions for heating buildings and water, a new study says. Biomass that is routinely collected and burned in the name of forest management around B.C.’s small and remote towns could generate clean energy at a lower cost than fossil fuels, according to a new white paper from the Pacific Institute for Climate Solutions. Dozens of First Nations communities are not on B.C.’s natural gas or electric grids, but may be surrounded by forests that could supply them with affordable energy, said study co-author Dale Littlejohn. PICS has created a new online assessment tool that will allow communities to quickly determine whether their local environment can produce enough biomass sustainably to fuel such a system. Even forests that are not being logged or thinned for fire prevention can be managed for the purpose of harvesting biomass for energy. Trees killed by pine beetle are also a potential fuel source. “We have a huge amount of waste biomass in B.C.” said Littlejohn. “There is huge potential at a building scale and a district energy scale.” District energy systems supply heat to entire communities — from clusters of commercial buildings to schools, prisons and hospitals — usually through underground pipes. At least half a dozen biomass generators are already in operation at the University of B.C., the University of Northern B.C. and in small towns such as Enderby and Quesnel. The biomass system at UNBC in Prince George is designed to replace 85 per cent of the natural gas consumed on campus. The technology is already well established in Europe, where most of B.C.’s pelletized waste wood is shipped as fuel, Littlejohn said. The PICS screening tool — called the Fire Interface Rural Screening Tool for Heating, or FIRST Heat — uses detailed information about the composition of the forest and estimates the amount of biomass that could be harvested through forest fire risk management without compromising the long-term viability of the ecosystem and the soil, which is usually replenished by wood waste and naturally occurring forest fires. The resulting data, along with information about the capital costs of generators and district heating systems, are used to calculate potential energy savings and greenhouse gas reductions compared with using conventional fossil fuels to heat space and water. The paper predicts local energy systems will create jobs in the forestry, transportation and service sectors and keep money spent on energy from flowing out of the local economy. “This is a great way to leverage a resource that is all around us and this biomass is going to burned one way or another,” said Littlejohn. “At least [biomass generators] reduce our reliance on fossil fuels and keep that money in the community.” Cases studies conducted by PICS found that Sicamous could reduce annual energy costs by up to $2.3 million and GHG emissions by up to 10,895 tonnes using biomass harvested from 70,963 hectares of mature local forest. On the other hand, the case for profitably managing young forests around Burns Lake was marginal due to lower biomass estimates. rshore@vancouversun.com Blog: vancouversun.com/greenman Podcast: vancouversunpodcasts.com/category/green-man Read more: http://www.vancouver…l#ixzz2dMCpI8se Taylor Scott International