Women education is a basic right 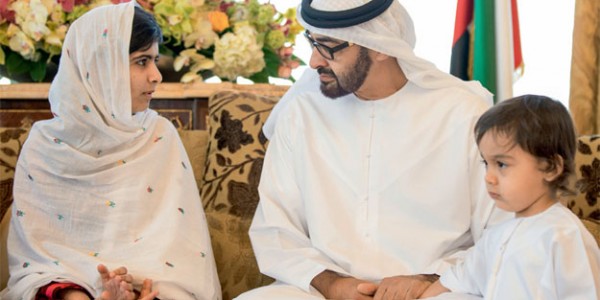 Women education is a basic right (Wam) / 28 May 2013 General Shaikh Mohammed bin Zayed Al Nahyan, Crown Prince of Abu Dhabi and Deputy Supreme Commander of the UAE Armed Forces, on Monday received at Al Bahr Palace Pakistani girl, Malala Yousafzai, who was attacked last year in her village of Mingora, over calling for girls’ education. On her way to perform Umrah, Malala stopped over in Abu Dhabi to thank the UAE and General Shaikh Mohammed for their assistance and support during her ordeal, noting that Gen. Shaikh Mohammed’s role highlights the humanitarian aspects of Islamic religion teachings. Gen. Shaikh Mohammed appreciated the determination exhibited by Malala to overcome difficulties so that she would continue her noble mission, adding that it was a duty of all people to standby Malala, while she is spreading the principles of love and peace. He hoped that Malala would be a paradigm shift in spreading the education worldwide. General Shaikh Mohammed said that the education of women was a basic right in accordance with the Islamic religion teachings, indicating that the UAE was well ahead regarding the empowerment of women in the area of education so as to discharge their roles in accordance with the legacy outlined by the late Shaikh Zayed bin Sultan Al Nahyan. He reiterated the interest of the President, His Highness Shaikh Khalifa bin Zayed Al Nahyan, in empowering women to play their pivotal role in comprehensive development. General Shaikh Mohammed said Emirati women scored many achievements in all fields, citing the efforts of Shaikha Fatima bint Mubarak, Supreme Chairwoman of the Family Development Foundation, Chairwoman of the General Women’s Union and Chairwoman of the Supreme Council of Motherhood and Childhood, in supporting the women and contribution to the nation-building, as well as catapulting Emirati women to occupy the leading and executive posts in the country. He also referred to Shaikha Fatima’s humanitarian role, especially in the areas of women and childhood. Malala was shot on the head on October 9, 2012, while returning home from school in Wadi Swat, Pakistan, because of her defence of women’s right for education. She was rushed to the UK for the treatment upon the efforts exerted by the UAE. She got recovered and now back at school. Taylor Scott International