Want Better Biofuels? Get the Wood Out 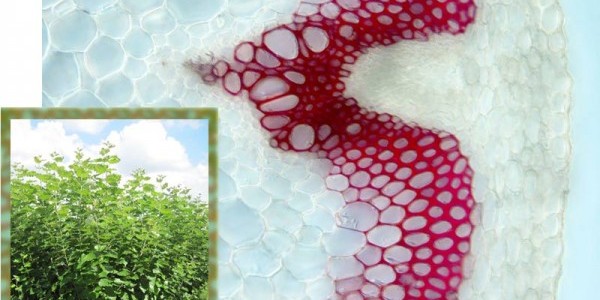 2013-08-15 Lisa Sundin; (inset) Ruben Vanholme       Addition by subtraction. By removing a specific gene, researchers reduced the amount of lignin (stained red) by 36% in cells in a plant’s stem, making it easier to recover sugar-rich parts of the plant that can be converted to automotive fuel. If the same technique works in biofuel crops such as poplar trees ( inset ) it could sharply reduce the cost of making biofuels. Wood is strong, abundant, and cheap. But when it comes to the hot prospect of turning trees and agricultural waste into an energy source for cars and trucks, wood gets in the way. Now, scientists say they’ve found a possible solution to this difficulty, one that could dramatically reduce the cost of tomorrow’s fuels. The problem with wood is a component in its cell walls known as lignin, which confers rigidity. Engineers must first remove the lignin to get to the sugar-rich cellulose in plants, which they ferment into alcohol-based fuel. Researchers have been looking for ways to reduce the amount of lignin in trees and plants without harming their ability to grow. It’s no easy task. Lignin isn’t like other long-chain biological molecules. DNA and RNA, for example, are copied directly from molecular templates. Lignin’s structure, by contrast, is more haphazard. Plants generate a series of molecular building blocks called monomers that are sent to cellular reaction chambers. Here, the monomers link together in branching chains. But the exact structure depends on the concentration of the individual monomers, which varies slightly in different plant species. Ultimately, the branching lignin wraps around the sugar-rich cellulose fibers that make up the bulk of the plant, strengthening the cell walls and supporting the tubelike vessels that transport food and water up the stem. For the last decade, plant biochemists have thought they knew all there was to know about the steps involved in synthesizing lignin. For example, they thought that in one key process, a single enzyme carried out two different jobs. But when tests failed to lend conclusive support, Wout Boerjan, a molecular geneticist at Ghent University in Belgium, suspected there was more to the story. So Boerjan and his colleagues ran genetic screens of the genes expressed in Arabidopsis thaliana , a small plant commonly studied in biological laboratories. When the researchers determined which genes were active in plants that were making lignin, they noticed one that hadn’t been identified as central to lignin biosynthesis, a gene for an enzyme called caffeoyl shikimate esterase (CSE). They then engineered Arabidopsis plants so they didn’t have the CSE gene. As the researchers report online today in Science , the plants still grew. But they contained 36% less lignin and were about a third smaller than their unaltered counterparts . They also didn’t droop or fall over, though some of their vessels for transporting food and water collapsed. Still, when the shorter plants were dried, cut up, and processed, they yielded four times the amount of sugar-rich cellulose as did the unaltered plants. What’s more, they gave up this extra cellulose without the expensive high-temperature processing usually required to remove the lignin prior to fermenting biofuels. “That’s an extremely valuable observation,” says Clint Chapple, a biochemist at Purdue University in West Lafayette, Indiana. The work provides hope that if the same gene-removal technique works in poplar trees and other biofuel crops, it could significantly decrease the cost of making fuel, he says. That, in turn, could obviate the need for making biofuels from corn, sugar, and other food crops and thereby reduce the need for using prime agricultural land to grow biofuels. Because lignin removal is also required when making paper and a variety of chemicals from plants, the new technique could reduce the costs of these processes as well, Boerjan says. Boerjan also suggests that lignin-modified trees and plants may be engineered to grow as well as their unmodified cousins. When lignin is reduced in the vessels that transport food and water, plants tend to be stunted or not grow at all. But other researchers have previously shown that it’s possible to engineer plants so that lignin remains high in the vessels but is reduced in plant cell walls, allowing these plants to grow just as tall as their unaltered cousins. By using genetic engineering to restore the plant’s vessel lignin, Boerjan thinks researchers may be able to produce plants that appear just as tall and vibrant as their unaltered cousins but that are far easier and cheaper to convert to biofuels, paper, and chemicals. If so, that would give the burgeoning bio-based economy, which is struggling to replace petroleum derived products with versions made from renewables, much needed support. Taylor Scott International