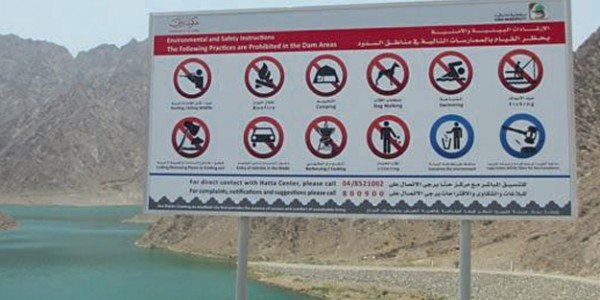 Visitors barred from driving to Hatta wadis Sajila Saseendran / 2 September 2013 Visitors and tourists to Dubai’s Hatta will be barred from driving into the wadis in the areas surrounding the dams in the mountain village as part of efforts to protect its environment. The Dubai Municipality has also prohibited tourist activities like swimming, fishing, camping, bonfire and barbecuing in these areas near the border. Hunting, cutting or uprooting the bushes or trees in the areas and destructing the flora and fauna are also strictly prohibited. Tourists are also barred from walking their dogs in the wadis and littering the area. The new instructions have been issued by the Environment Department of the Dubai Municipality which intends to declare the valleys surrounding the dams as ‘protected land,’ an official told Khaleej Times . “The dam area is part of a proposed conservation area. That is why the municipality has come up with the new guidelines to protect the environment in this place,” said Nature Conservation Officer with the Environment Department Jeruel Aguhob. The Environment department, with the support of the advertisement section at the Planning Department and the Municipality Centres Department, has fixed huge boards on the way to the wadis to alert the travellers about the new instructions. The boards say that legal action will be taken against those not complying with the new environment and safety regulations. The boards are fixed for tourists and visitors mainly to educate them to follow practices that preserve the environment including air, water and soil, the municipality said. “We want to prepare the people ahead of winter. A lot of tourists are expected in the winter. They shouldn’t be shocked when they go down the valley. That is why we have kept the boards on the main road leading to the wadis,” said Aguhob. He said people wishing to drive down to the wadis will now have to take special permission from the Municipality Centre in Hatta. “We won’t allow everybody  to drive their SUVs down to  the valleys. Those going there  for research purposes and  scientific programmes will be definitely allowed. Trekking in still allowed. But littering is strictly prohibited.” Tourists wishing to take photographs in the wadis will have to walk down to the valley, he said. Thousands of tourist and residents visit Hatta every year, mainly to take a break from the hustle and bustle of Dubai’s city life and to enjoy the beauty of the nature in the mountain and the valleys. Aguhob said the municipality will be preparing more educational materials to make tourists and tour companies aware of the new regulations. A tour manager from a Dubai-based tour company said the regulations would make the weekend Hatta trips less exciting for residents and tourists “There are only two major things to see in Hatta — the heritage village and the wadis. If people are not allowed to have any tourist activities in the wadis, it will affect the flow of tourists,” he said. However, a staff at a prominent hotel in Hatta said not many tourists are into swimming or fishing in the wadis and camping in that area. “They know that they cannot swim over there. They just go for a couple of hours and take pictures,” she said.— sajila@khaleejtimes. com Taylor Scott International