US ready for action on Syria 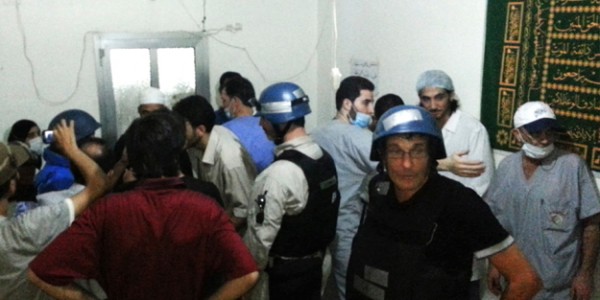 US ready for action on Syria Allan Jacob / 27 August 2013 The United States on Monday said its forces in the region were ready for any military action on Syria if ordered by President Obama as UN chemical weapons experts got to work in the stricken country, interviewing and taking blood samples from victims of an alleged gas attack last week. “I can confirm that the US Navy has assets in the region prepared to support any decision by the president,” said Commander Bill Speaks from the Office of the Secretary of Defense Chuck Hagel, in response to questions by Khaleej Times . Khaleej Times can also confirm that the Harry S. Truman Carrier Strike Group arrived in the region last week after transiting through the Suez Canal. US 5th Fleet spokesperson Lt. Marissa Myatt said it was a routine deployment and the Group would replace another nuclear-powered carrier, the USS Nimitz . What is significant is that it will be the first time in a year when two carriers operate in the region. UN chemical weapons experts visit a hospital where wounded people affected by an apparent gas attack are being treated, in the southwestern Damascus suburb of Mouadamiya on Monday. -Reuters ‘‘We’ve trained hard and we’re ready to operate alongside our coalition partners to conduct maritime security operations to ensure stability and build trust and confidence throughout the region,” said Rear Adm. Kevin Sweeney, commander of the Group. The USS Harry S. Truman Strike Group is accompanied by guided-missile cruisers USS San Jacinto and USS Gettysburg ; guided-missile destroyers USS Bulkeley and USS Mason ; a strike fighter squadron; an airborne early earning squadron; an electronic attack squadron; a helicopter sea combat squadron and a helicopter maritime strike squadron. This development comes in the wake of talks between military leaders from the United States, Europe and the Middle East in Jordan for what could be a council of war should they decide to punish Syria for the worst reported chemical weapons attack in 25 years, agencies reported. Last week, hundreds of people died in Damascus suburbs in what appears to have been the worst chemical weapons attack since Saddam Hussein gassed thousands of Kurds to death in 1988. Meanwhile, UN investigators crossed the frontline from the centre of the capital, which remains under Assad’s control, to inspect the Mouadamiya suburb, one of at least four neighbourhoods hit by poison gas last Wednesday before dawn, Reuters reported. The UN said one vehicle in its convoy was crippled by shooting by “unidentified snipers”, but mentioned no injuries. They continued on after turning back for a replacement car. “I am with the team now,” a doctor who uses the name Abu Karam told Reuters by telephone from Mouadamiya. “We are in the Rawda mosque and they are meeting with the wounded. Our medics and the inspectors are talking to the patients and taking samples from the victims now.” Wassim Al Ahmad, an opposition activist, said members of the Free Syrian Army umbrella rebel organisation and the opposition’s Mouadamiya Local Council were accompanying the inspectors on their tour of the suburb. “The inspectors are now examining victims being treated at a makeshift hospital in Mouadamiya and are taking blood samples from them,” Ahmad said. Video filmed at the site showed inspectors in black and blue body armour and blue UN helmets walking through a street as curious onlookers came up to watch. They shook hands with men who appeared to be rebels wearing camouflage vests, and were accompanied by doctors and local residents. The group descended into the basement of a building where they were told injured survivors were being treated below ground to protect them from more shelling. Another video showed an inspector interviewing a patient and taking notes. Activists say at least 80 people were killed in Mouadamiya when the district was hit with poison gas. Hundreds of people were also killed in three other rebel-held districts – Irbin, Ain Tarma and Jobar. An opposition activist said a large crowd of people gathered to air their grievances to the UN team. There was also a plan for the experts to take samples from corpses. (With inputs from agencies) allan@khaleejtimes.com Taylor Scott International