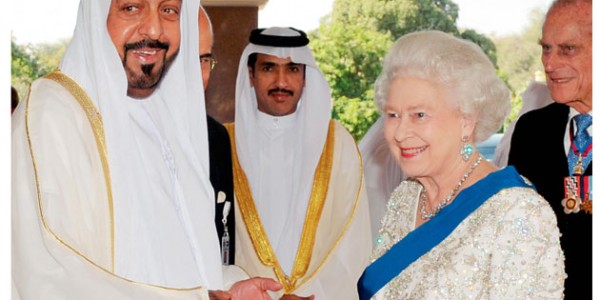 UAE-UK relations hailed Amanda Fisher / 29 April 2013 British residents in Dubai will be eagerly watching the outcome of the impending meeting between the UAE’s President and the Queen of England — the second in three years. As the President, His Highness Shaikh Khalifa bin Zayed Al Nahyan prepares for his state visit to the United Kingdom on Tuesday, during which he will visit Queen Elizabeth two-and-a-half years after she came here, British expatriates in the country are relishing the close ties. British Business Group chairman Jonathon Davidson said relations between the two countries, which had historically been strong since even before unification, were rejuvenated after the Queen’s 2010 visit. That rejuvenation should continue as a result of this week’s meeting, he said. “During the economic boom, like many international relationships, people lost the day-to-day focus because everyone was pursuing their own economic goals and there was no real requirement to have (them)…obviously when the crisis happened, there was a requirement for a lot of international economic relationships to be revitalised.” This coincided with Conservative leader David Cameron coming to power, and Davidson said Cameron’s Prime Ministership had focused on reinvigorating ties, with Cameron having visited twice since his tenure — while foreign secretary William Hague and London mayor Boris Johnson have both visited in recent weeks. “I think the improvement started two-and-a-half years ago and now we need to act on the back of that to make sure that continues in as many areas as possible. The UK and the UAE, in which up to 120,000 Brits living here are the highest Western expatriate population, were looking at working on a lot more projects together and “being a lot more economically intertwined”, Davidson said. Davidson, who had been involved with “behind-the-scenes” discussions about greater UAE-UK collaboration, said he expected topics of discussion to centre, from a business perspective, on education, oil and gas, professional services and the SME sector, as well investment from UAE companies into such things as the world’s largest windfarm London Array and the London Gateway port. Other topics like visas on arrival for Emiratis and regional security cooperation would also likely be discussed, he said. “Those will all go on in parallel, the left hand pursuing big joint projects and right hand pursuing ancillary matters.” The meeting was significant, not only because it would be a useful discussion but also as a “visible sign” of collaboration between the two countries. “It’s very important from time-to-time that the most senior (officials) visibly promote the relationship, because that’s like the icing on the cake for all the hard work that goes on.” Davidson said the SME sector, which comprised most of the 2,000 British businesses in Dubai Davidson’s group represented, was the best chance to get business booming after the sluggish recession-era economic performances. “It’s a perfect opportunity for the UK and UAE (SME) companies to join their technical knowledge, and their learning and their funding.” British Consul-General Edward Hobart said Shaikh Khalifa’s visit reflected the “special friendship between the royal families in the UK and UAE”, borne out of a 200 years of history and a commitment to common values and shared interests. Ties between the countries were already strong, but strengthening, he said. “We work closely together on the full range of bilateral areas including diplomacy, business, and security. During Prime Minister David Cameron’s visit to the UAE six months ago, collaboration between our two countries across everything from trade to education, energy to defence increased.” Hobart said he was proud of the “rich and prominent connections” between the two countries. Briton Christopher Southcombe and his wife have lived in Sharjah for the past 17 years, after coming initially to do some short contract work on what would be an exhibition on painted dhows. “The exhibition never happened but… I found when I was here that this place was alive and throbbing and everything was happening and everything was positive.” Southcombe said that contrasted to the England of the ‘90s. “In England if the cricket team lost people were saying ‘Sack the manager’, if the football team lost: ‘Sack him’…the people were whingeing so much, I said to Pat (wife) ‘Come on let’s go’. So we did, we just sold up and went.” Southcombe said in the time the couple had been here, they had witnessed great development — as well as an influx of British expatriates. “I’m very impressed with this country, it’s really dynamic and go-ahead and the relationship with the UK is very important, and this kind of interaction between the heads of state is meaningful.” Southcombe said all visits between heads of state were beneficial. “Simply like having a dinner party and renewing acquaintances with old friends. The fact they’ve bestowed honours upon each others, it’s a public show of the friendship, and an important friendship.” The two countries had a long history together, and while there had been some negative interaction in the early days the partnership was now very positive – “like a marriage that lasts for years and years and years and the bonds grow stronger and stronger.” Southcombe said while although he would eventually get “thrown out”, he would stay here and keep working for some time yet. “It is home at the moment, we have no home in England. For the last 17 years, this has been our only home.” Taylor Scott International