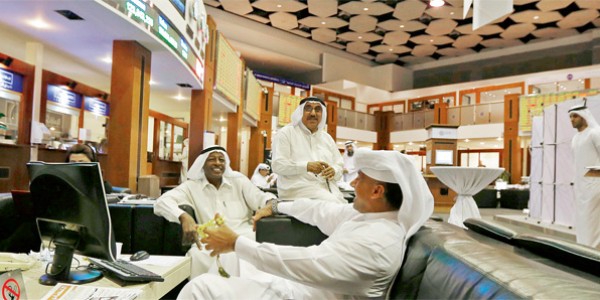 UAE stocks hit multi-year highs on upswing in Gulf Issac John / 23 August 2013 Stock markets in the UAE rose to new multi-year highs on Thursday in line with a general upswing across the Gulf bourses with the sole exception of Saudi Arabia where the market recorded slight declines. Investors share a laugh as they monitor stocks at the Dubai Financial Market. Gulf economies are generally less vulnerable than most to capital outflows caused by rising US yields. — Reuters Dubai’s benchmark DFMGI index rose 1.1 per cent to 2,700 points as Abu Dhabi’s ADI climbed 0.7 per cent to 3,949 points — a new 58-month high. In Qatar, the QSI index advanced 0.4 per cent to 10,110 points. Despite a sell off in some emerging markets, most Gulf bourses recorded gains.  Union Properties jumped 10.4 per cent, up for a fifth straight day as the stock played catch-up with the wider market. Union Properties shares are up 37.5 per cent year-to-date, compared with Dubai’s gains of 66.4 per cent. The stock accounted for a third of all trading on the bourse on Thursday.  Emirates NBD, one of the biggest banks in the region, and Abu Dhabi Commercial Bank rose after Goldman Sachs Group raised the duo to buy on “solid” second-quarter earnings. Emirates NBD advanced 1.8 per cent to Dh5.6, snapping two days of declines. The lender was the biggest gainer on the DFM General Index. Abu Dhabi Commercial Bank climbed 2.5 per cent, the most in more than two months, to Dh5.3. The DFM and ADX are among the world’s top-five best-performing indexes this year. The Dubai Financial Market performed very well since the start of 2013; its General Index recorded a 12.7 per cent growth by the end of March, showing investors’ interest in the capital market.  In the second quarter, UAE markets won a much-awaited milestone that will further increase investments in the stock market, as New York-based global index developer MSCI has decided to reclassify MSCI UAE from frontier markets to emerging markets status. GCC equity markets had a good start in 2013, largely due to an uptick in earnings across key cyclical sectors, such as banking and real estate. Analysts said expectations of double-digit growth in 2013 net income for Gulf companies were driving bullish sentiment. With their current account and state budget surpluses and currency pegs to the US dollar, Gulf economies are generally less vulnerable than most to capital outflows caused by rising US yields. Dubai’s index rose 1.1 per cent to its highest close since November 2008. In Qatar, banks helped the benchmark QSI rise 0.4 per cent, up for a fifth straight session to hit a near five-year high. Qatar International Islamic Bank and Qatar Islamic Bank rose 4.6 and 2.4 per cent. Elsewhere, Cairo’s benchmark index EGX30 gained 0.7 per cent, recovering ground for a third session from Monday’s two-week low.   In Saudi Arabia, the index TASI slipped 0.3 per cent, coming off Wednesday’s 59-month high. Investors booked gains on food and agriculture shares — that sector’s index.      — issacjohn@khaleejtimes.com Taylor Scott International