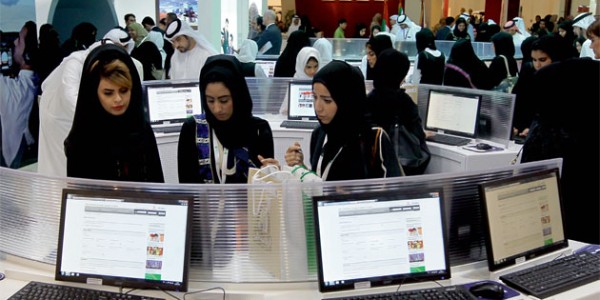 Training is key to attract Emiratis, say employers Sarah Young / 2 May 2013 Training and career paths are the keys to attracting the new generation of Emirati workers, say employers. Speaking at Careers UAE 2013, du senior vice-president of human resources and shared services Yaser Obaid said the company would recruit 60 UAE nationals, including 30 for its Fujairah customer service centre, this year. However, it was still a challenge to find qualified Emiratis, he said.   The company’s strategy had moved from just targeting recent graduates to finding people with potential, assessing them in-house, and then training them. Another challenge was Emirati workers’ lack of international exposure, which du was trying to combat by outsourcing employees to other international partners, as far away as China. The new generation were much more open to these opportunities, and were much more ambitious, than Emiratis had been 10 years ago, he said. du offers an 18-month ‘Masar Challenge’ development programme, comprising training, team-building, seminars with business leaders, a personal coach, and on-job rotations to gain experience. Jobseekers at the Careers UAE exhibition at the Dubai World Trade Centre. — KT photo by Rahul Gajjar Emiratis make up 32 per cent of the du workforce, and the company aims to increase the number by three per cent each year. About 40 per cent of higher management are Emiratis. Obaid said private companies needed to take the issue of Emiratisation more seriously and up their efforts to attract locals or they would continue to stay away, he said. Suhail bin Tarraf, chief executive officer of Tanfeeth, an onshore shared-services organisation, said talent development was key to building the next generation of UAE leaders. This was the company’s first year at Careers UAE, in an attempt to gain “access to a pipeline of future leaders from the region, which we can develop through our in-house training and development programmes”, he said. Tanfeeth offers more than 50 training programmes. Senior projects manager at the Private Office of Shaikh Majid bin Mohammed bin Rashid Al Maktoum, Chairman of Dubai Culture and Arts Authority, Fatma Ebrahim Ahmed agreed it was often a major challenge for orgnaisations to find qualified locals, which was why the office launched the Shaikh Majid bin Mohammed UAE Nationals Training Initiative. Ninety per cent of companies taking part in the initiative, which provides 200 nationals with three-months supervised work experience, were from the private sector. “We’re trying to make Emiratis get used to the private sector, because the new Dubai is going in this direction of ‘work, work, work, sleep, work’. It won’t be sustainable if they don’t… The UAE is moving very fast towards international (standards) so we should have qualified Emiratis who know how to deal with these fast-paced environments.” Jobseeker Aamer Al Tenaiji from Ras Al Khaimah studied communication engineering and wanted to work with the Ministry of Education. He said he wanted to work in the public sector for 10 years, and then switch to private. This experience would give him good training, and set him up with better working relationships with authorities when he was working for a private company, he said. However, Massoma Hassan Abdullah, vice-president for Emiratisation at Emirates Airlines, said the company had been impressed with the number of qualified jobseekers and the 400 applications received, on day one of the event. sarah@khaleejtimes.com Taylor Scott International