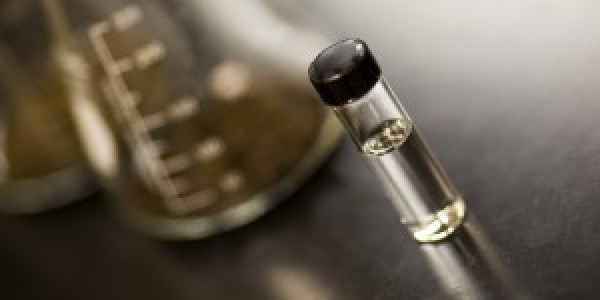 BY JEFF SPROSS ON AUGUST 23, 2013 By throwing together a common fungus and a common bacterium, researchers are producing isobutanol — a biofuel that gallon-for-gallon delivers 82 percent of gasoline’s heat energy. The more common ethanol, by contrast, only gets 67 percent of gasoline’s energy, and does more damage to pipelines and engines. And the University of Michigan research team did it using stalks and leaves from corn plants as the raw material. The fungus in question was Trichoderma reesei , which breaks down the plant materials into sugars. The team used corn plant leftovers in this case, but many other forms of biomass like switchgrass or forestry waste could also serve. The bacterium was Escherichia coli — good old-fashioned E. coli — which then converted those sugars into isobutanol. Another team of researchers at the University of Wisconsin-Madison recently came up with a similar process by studying leaf cutter ants, but their work produced ethanol instead. The University of Michigan team also got the fungi and bacteria to co-exist peacefully in the same culture and bioreactor. That means fewer cost barriers to commercializing the process: “The capital investment will be much lower, and also the operating cost will be much lower,” Xiaoxia “Nina” Lin, the team’s leader, explained. “So hopefully this will make the whole process much more likely to become economically viable.” The big advantage of a cellulosic biofuel like this is twofold. One, because it can be produced from crops that don’t double as a food source, demand for it won’t drive up food prices or contribute to global food insecurity. Traditional corn-based ethanol obviously competes with one of the world’s most basic and widely-used foods, and American and European demand for it has contributed to spiraling food costs and crises in Guatemala and across the developing world. Studies looking into the 2008 food crisis determined that biofuel policies contributed to the problem, compounding the threat of global food insecurity, which in turn helps drive geopolitical upheaval and destabilization. Two, by driving up demand for food crops, traditional biofuels encourage individuals and countries to clear ever more natural land for agriculture. Grasslands and natural forest store more carbon from the atmosphere than cropland. So the growth in biofuel production, means less natural ecology to absorb carbon, leaving more greenhouse gas in the atmosphere. On top of that, agriculture involves its own carbon emissions from driving tractors and such. So put it all together and traditional biofuel production is largely self-defeating in terms of the final amount of carbon dioxide left in the atmosphere. But if a process like this one produces biofuel purely from waste materials — stuff left over from crops we would’ve grown regardless, on land we would’ve cleared regardless — those biofuels will deliver a much bigger net positive when it comes to fighting climate change. “We’re really excited about this technology,” said Jeremy Minty, another member of the team. “The U.S. has the potential to sustainably produce 1 billion tons or more of biomass annually, enough to produce biofuels that could displace 30 percent or more of our current petroleum production.” And it’s not just fossil fuels that could be replaced, either. Petrochemicals are also used in making a host of other products, especially plastics. The research team hopes their work could be adapted to replace the petrochemicals used in those processes as well. HT: CleanTechnica Taylor Scott International