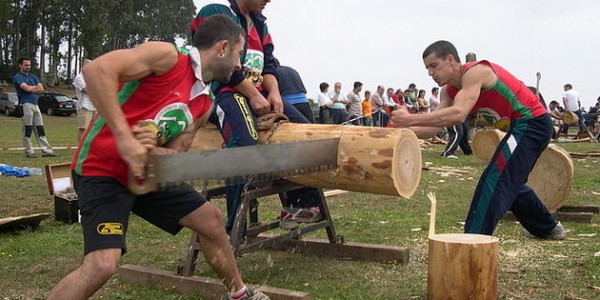 By Michael Byrne Here’s the problem with using wood as a biofuel: it’s wood . That’s it, basically. The thing we associate with wood being wood, rigidity, is what makes trees poor materials for use in ethanol production. Rigidity comes from lignin, an organic polymer that fills in the empty spaces within the cell walls of plants; its function is generally mechanical—providing structural strength for the cell and aiding in the flow of water through the plant. Lignin also burns great, but that’s a different kind of fuel. In biofuel applications, we want to get past the lignin to cellulose, which is converted to alcohol-based fuel that can be used to power our cars and trucks. Split wood isn’t the best choice for internal combustion, so the lignin just gets in the way of the part that is the best choice—sugar in the form of cellulose. Let’s stop for a moment. What exactly is biofuel? It’s diesel basically, albeit not derived from the fossil fuels we’re about to run out of and that we extract from the planet at considerable cost socially, environmentally, and economically. Biofuel isn’t “clean” fuel; it’s still a thing resulting in greenhouse gas emissions, though less per unit of energy derived than dinosaur stuff. So as far as being “better” it’s probably not much more than halfway there. But it’s here now in a world with a heavy dependency on diesel-powered trucks for moving its goods around. In many places, particularly Europe, there’s already an infrastructure for it. In several U.S. states, its use is already mandated and the highly ungreen U.S. Energy Policy Act of 2005 mandates a significant increase in biofuel use in the coming years. The point of this aside is less to argue that biofuel is good or bad than to say that “it’s here.” And biofuel being here, even against the will of those of us that might know better, means that it’s in our interest to have better and more efficient biofuel. This means making cellulose more efficient to access by eliminating the wood in wood, more or less—eliminating the lignin barrier. The solution, unsurprisingly, is GM biofuels. Let’s make trees with only the good stuff, as far as biofuels are concerned. Floppy plants. It’s a difficult task, however—the process that plants use to make lignin isn’t as obvious as in most other organic molecules. Different plants do it differently, even if it’s the same stuff fulfilling the same functions. According to a new report in Science , Wout Boerjan, a molecular geneticist at Ghent University, tracked down the correct common gene central to synthesizing lignin by way of an enzyme called caffeoyl shikimate esterase. Once identified, Boerjan experimented with silencing this central gene, with the result being plants containing a third less lignin and able to produce up to four times the amount of cellulose. They weren’t even really floppy either. The main catch is that with less of this crucial building material, the plants lost some of their ability to transport food or water. As a result, they were a bit stumpy. It’s thought this could be worked around with more engineering; maybe we could just reduce lignin in cells where it isn’t needed as much. If this is registering as kind of “whatever,” consider the United States’ ethanol problem . The U.S. grows a ton of corn, but much of it is earmarked for biofuel production. This keeps corn prices high across the globe, which keeps civilization primed for violence and unrest. If we’re able to grow biofuel crops with four times the efficiency, that’s a whole lot less farmland needed to keep fuel tanks full. This is also good news for paper production efficiency, though I’m not aware of any connection between the price of Charmin and rioting in the streets. Taylor Scott International