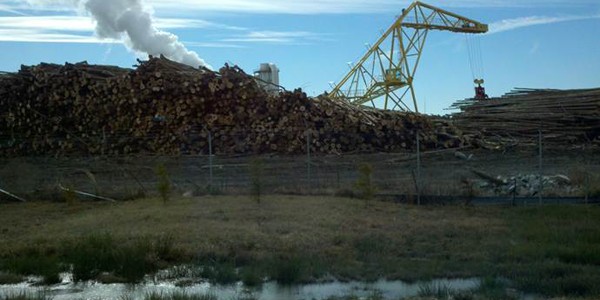 By Tanya Dimitrova , special to mongabay.com June 06, 2013 In order to meet the European Union’s goal of 20% renewables by 2020, some European utility companies are moving away from coal and replacing it with wood pellet fuel. The idea is simple: trees will regrow and recapture the carbon released in the burning of wood pellets, making the process supposedly carbon-neutral. But just like other simple ideas, it misses out important details that can turn it on its head. The catch is that the process could be carbon neutral only after the trees regrow to the original size. In the case of cutting 100-year old forest, it would take a century. If the forest is clear-cut, it may never regrow, unless replanted. If the new forest plantation is composed by different or fewer tree species, it will most likely store less carbon than the original forest. Finally, if the forest ecosystem was rich and valuable, as for example a wetland forest, its wildlife may be lost forever. Cutting old-grown forests, wetland forests and clear-cutting is illegal or highly regulated in most of Europe. In the Southern U.S., however, it is perfectly legal. That is where the large wood pellet producers are staging their operations. A Maryland-based company Enviva is one of the top five largest pellet producers in the US. Its facilities in North Carolina and Mississippi currently produce and export to Europe more than half a million tons of wood pellets every year. The company plans to triple its output in the next few years to meet ever-increasing demand for wood biomass fuel, mainly from European utilities, but also from U.S. power plants. Enviva’s facility in Ahoskie, North Carolina. The photograph shows that the company is using large quantities of whole tree trunks for its pellets. Photo by: Southern Environmental Law Center. Enviva claims that it produces wood pellets only from low-grade wood resources such as chips, bark, sawdust by-products, treetops, branches, and other forestry debris remaining after the tree trunks from commercial forests have been shipped for construction material. These unprocessed residues would most likely otherwise go unused as a resource. Additional biomass sources currently include low-grade wood fiber and small logs. However, North Carolina private loggers and land-owners interviewed for a Wall Street Journal investigative report last week admitted that trees more than 100 years old, including some from wetlands, does wind up in pellet plants. “Enviva, now they need wood bad enough that they’re paying for some swamp logging,” one logger said to the WSJ reporter. The company did not respond to an information request by Mongabay this week. Scot Quaranda from Dogwood Alliance, and NGO working on protecting Southern forests, explains that there is little to no regulation impacting the management of forests in the Southern U.S.. Unfortunately, 90% of the forests are privately owned and lack legal protection. Most of the management guidelines that are on the books are completely voluntary and do not include limitations to large-scale clear-cutting, conversion of natural forests to plantations, logging of wetlands, use of toxic chemicals, or logging of endangered forests. That is why Dogwood Alliance and the Natural Resources Defense Council have launched a new campaign, dubbed Our Forests Aren’t Fuel . “We focus our work on the marketplace, because in the South, big corporations drive both the destruction and changes in forest practices,” says Quaranda. The irony is that European utility companies restrict the import of wood pellets to developed countries such as the U.S. exactly in order to avoid illegal logging. “The US forest sector is well set up and managed, meets our sustainability criteria and the supplies of sustainable biomass are plentiful,” says Melanie Wedgbury from Drax Power—the largest British electrical power generation company. Last year Drax announced plans to transform itself into a predominantly biomass-fuelled generator. The company is converting three of its six generating units to run on 100% biomass instead of coal. According to a BBC report , Drax will be burning seven million tons of plant material a year. Bayou forest in Lousiana. Photo by: Rhett A. Butler. REFERENCE: Searchinger, Timothy D., et al. “Fixing a critical climate accounting error.” Science 326.5952 (2009): 527. Read more at http://news.mongabay…kycyOfw7HjE2.99 Taylor Scott International