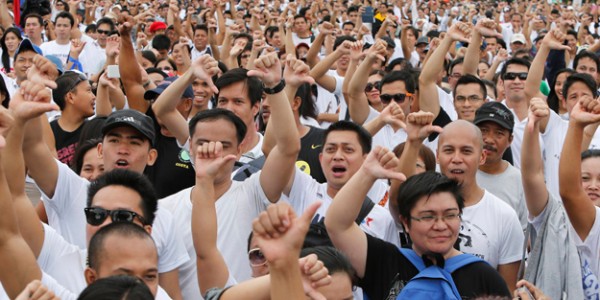 Social media fuels massive Philippine anti-graft rally (AFP) / 26 August 2013 Tens of thousands of protesters gathered in the Philippine capital on Monday to voice outrage at corrupt politicians, in a modern-day “People Power” rally fuelled by social media. The march, emulated on a smaller scale in other cities around the country, was the largest anti-graft demonstration since President Benigno Aquino was elected in 2010 on a platform to fight corruption. Demonstrators gesture a thumbs down sign during a protest against official corruption at Luneta park in Metro Manila on Monday. -Reuters The protesters ranged from members of the clergy and students to businessmen, middle-class families, lawyers and other professionals, in a sign of the breadth of anger over graft in the impoverished nation. But while few called for the ousting of Aquino, whose personal ratings remain high, there was widespread fury with politicians. “We are all angry at all the stealing of the politicians. We are telling them that time is up,” said 80-year-old, retired university professor Teodoro Jurado. Organisers said the rally drew up to 400,000 people while the police estimate was a maximum of 100,000. Urban planner Paulo Alcazaren estimated 250,000-300,000 attended, based on the park’s size and aerial photographs he took. Calls for protest began circulating on Facebook and Twitter about two weeks ago after a series of newspaper articles about a major scam involving legislators’ Priority Development Assistance Fund (PDAF). The fund is money allocated for lawmakers to be used in their pet development projects. Critics charge they are “pork barrel” projects which have traditionally been a source of corruption. At the centre of the controversy is a businesswoman who reportedly connived with legislators to syphon off some 10 billion pesos ($230 million) from the fund. She has since gone into hiding after being charged with the illegal detention of a whistleblower. Middle-aged physician Paz del Rosario, one of the protesters, said she attended “to be part of a historic event”. “Hopefully this will be the start of a bigger thing. All walks of life are here. This is from social media, the Internet, tweets and texts. There is no leader here,” she said. Many protesters wore pig masks and oinked in unison at noontime to condemn the legislators’ pork barrel. The influential Archbishop of Manila, Cardinal Luis Tagle, called on the crowd to be “honourable” and to work together for the less fortunate. “Let us look upon the oppressed and the poor as our true brothers. Let us listen to the heartbeat of our nation and the voice of God,” he said. Church leaders have previously played crucial roles in calling support for protests in the largely-Catholic Philippines, such as the 1986 “People Power” revolt that helped topple dictator Ferdinand Marcos. In 2001 a popular uprising overthrew the graft-tainted president Joseph Estrada. In the 1986 revolt, radio stations had helped summon the populace while in the 2001 uprising, it was cellphone SMS or “text” messages that brought many protesters out. Aquino had previously planned to expand the PDAF in his 2014 budget so that each senator would receive 200 million pesos ($4.5 million) while each member of the House of Representatives would get 70 million pesos. But in the face of growing anger last week, the president announced that he was suspending the releases of money and vowed to reform the system. At a speech marking the country’s national heroes’ day, Aquino said the government would catch those who stole state funds. “We will do everything in our power to find those who conspired to take advantage of the PDAF’s good intentions, and to hold them accountable,” he said. National police spokesman Senior Superintendent Reuben Sindac said the rallies were all peaceful, and the Manila marchers even cleaned up the park afterwards. Taylor Scott International