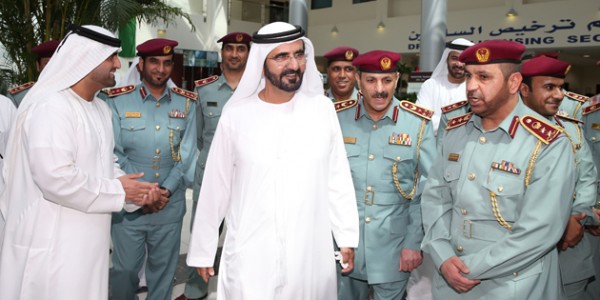 Shaikh Mohammed to unveil plaques of five-star centres (Wam) / 26 February 2014 Vice-President says diligent work teams deserve praise and appreciation while unveiling five-star plate at Traffic and Licensing Centre in Fujairah. Federal government customer service centres serve as the real ground of competition among public service providers to deliver world-class services to the local community, His Highness Shaikh Mohammed bin Rashid Al Maktoum, Vice-President and Prime Minister of the UAE and Ruler of Dubai, has said, and added the new Star Rating Initiative, which he launched on Monday, will generate true leaders who deserve “our thanks and commendation”. All federal government customer service centres will abide by the Star Rating Initiative. Intended to bring about a quantum leap in the efficiency of government services as per global standards, the system rates public service centres with a number of stars (from two to seven) by placing a special plate at the entrance of each federal customer service centre. Shaikh Mohammed inaugurated Phase 1 of the evaluation and classification of 75 government service centres according to the new Star Rating Initiative on Monday. Three centres obtained the 5-star rating, and Shaikh Mohammed unveiled the first plate at the Customer Service Centre of the Ministry of Justice, Abu Dhabi. Thirty-three centres received a 4-star rating and 39 centres received a 3-star rating. The evaluation and classification process will continue to cover all federal customer service centres by the end of 2014. Shaikh Mohammed made his remarks during a visit to the Traffic and Licensing Centre in Fujairah on Tuesday to unveil a five-star plate which the centre obtained. Shaikh Mohammed pledged to unveil the five-star plaque of the centres himself, saying that diligent work teams deserve praise and appreciation. The Vice-President took a tour of the traffic centre, which is run by 173 employee and provides 77 government services to 110,000 people. Last year, the centre processed 200,000 transactions. During his tour, Shaikh Mohammed thanked the employees for their continuous dedication and diligence to improve public services and promised to revisit them in case they add more stars. In a speech on the occasion, Shaikh Mohammed said, “Direct dealing with the customers carries both tremendous challenges and opportunities at the same time and the true leader is one who succeeds on the ground and who can achieve the highest rate of customer satisfaction. This applies to all — from the head of the government to the junior employee — because the criteria of real success in government work are to serve public interest and create opportunities for them to achieve happiness for themselves and their families.” The UAE is the first country in the world to adopt this rating system for government service centres based on a comprehensive operational framework that emulates the standards applied in hotels, banks and aviation companies. The project is part of the Emirates Government Service Excellence Programme and is managed by the Ministry of Cabinet Affairs. It embodies the practical steps to develop government services according to the international standards and rate all federal customer service centres based on the development of services and responding to customers’ requests. The inauguration ceremony was attended by Mohammed Abdullah Al Gergawi, Minister of Cabinet Affairs; Musabbah Rashid Al Fattan, Director-General of the Dubai Ruler’s Court; Khalifa Saeed Suleiman, Director-General of Dubai Protocol Department; and Brigadier Ahmed Mohammed Ghanem, Commander-in-Chief of Fujairah Police. For more news from Khaleej Times, follow us on Facebook at facebook.com/khaleejtimes , and on Twitter at @khaleejtimes Taylor Scott International