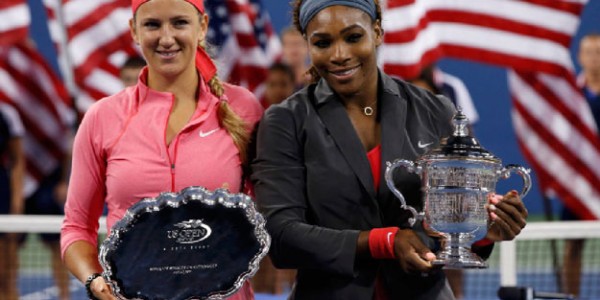 Serena Williams beats Azarenka in US Open final (Reuters) / 9 September 2013 Serena Williams repeated as US Open women’s champion by holding off a battling Victoria Azarenka of Belarus 7-5 6-7(6) 6-1 in a windblown final at Arthur Ashe Stadium on Sunday. Serena Williams of the US holds her winner’s trophy as Victoria Azarenka of Belarus (L) holds the runner up trophy after Williams won their women’s singles final match at the US Open tennis championships in New York on September 8, 2013. – Reuters  Williams bounded in a series of joyous jumping jack leaps after Azarenka’s backhand sailed long on the second match point of a thrilling, two-hour 45-minute final that earned her a fifth US Open singles title that took her total to 17 grand slams. The big-hitting American, who turns 32 later this month, became the oldest US Open women’s winner since tennis turned professional 45 years ago, eclipsing Australian Margaret Court, who was 31 years and 55 days when she won the title in 1973. The triumph moved Williams to within one grand slam singles crown of Chris Evert and Martina Navratilova for a tie for fourth place on the all-time list behind Court (24), Steffi Graf (22) and Helen Wills Moody (19). Serena Williams of the US raises her trophy after defeating Victoria Azarenka of Belarus in their women’s singles final match at the US Open tennis championships in New York on September 8, 2013. – Reuters It had looked like it was going to be plain sailing for Williams after she won a difficult first set, boosted by a late break in the 11 th game for a 6-5 lead and then served out a love game before racing to a 4-1 second-set lead. Williams, who earlier looked confounded by the gusty wind that affected service tosses and the direction of bounces off groundstrokes and was muttering to herself between points, finally settled into a rhythm in the second set. “The wind was unbelievable,” said the champion. “And it just got worse and worse and it never let up. But at this point you have to play under any circumstance.” She claimed the 4-1 lead after Azarenka double-faulted three times in the fifth and her US Open repeat looked a certainty as she begun to find her range on her imposing service game that saw her serve broken only twice in six previous matches. But Azarenka was not ready to capitulate. “I think it was raising from the first point, the tension, the battle, the determination,” the second seed said about the quality of the match. “It was really kind of like boiling the water. It felt from every point, it was rising the level.” ‘Great match’ The Belarusian showed her fight and took advantage of a string of Williams errors to break right back for 4-2 and rode that momentum. Twice Williams served for the match, at 5-4 and again at 6-5, but Azarenka rose up to break the American’s serve and force a tiebreaker. Williams took a 3-1 lead but Azarenka won five of the next six points to seize a 6-4 advantage and sent the match to a third set when Williams belted a backhand long to lose it 8-6. Serena Williams of the US celebrates after defeating Victoria Azarenka of Belarus in their women’s singles final match at the US Open tennis championships in New York on September 8, 2013. – Reuters “I think I got a little uptight,” Williams said about squandering her chances. “I wasn’t playing smart tennis. (But) you have to keep fighting for everything.” The third set stayed on serve until the fourth game when another double fault, her seventh of the match, sank Azarenka and handed Williams a 3-1 lead. With the stadium crowd roaring their support for the home favorite, the American broke Azarenka two games later for good measure to make it 5-1 before she claimed victory when the Belarusian sent a backhand long on the second match point. Williams blasted 36 winners in the match against 17 for Azarenka, and blasted nine aces against just two for the Belarusian, who won an impressive 10 of 15 points at the net when she stepped up the pressure on Williams. “Victoria, you played unbelievable,” said Williams at the trophy ceremony. “What a great match and what a great person. Vika is such a great opponent, she’s such a great fighter. It was never over until match point,” added Williams. The top seed collected the $2.6 million top prize and pocketed an addition $1 million bonus for having won the US Open run-up series of tournaments. Azarenka said she had been beaten by the better player. “It is a tough loss. But the best player deserves the win today. I gave it all again this year,” said Azarenka, who lost 7-5 in the third set to Williams in last year’s final. “We gave it everything we got.” In the men’s doubles final, Leander Paes and Radek Stepanek were convincing winners over Alexander Peya and Bruno Soares. The India-Czech pairing of Paes and Stepanek dominated the title match to record a 6-1 6-3 victory over their Austria-Brazil rivals. Paes, 40, won his third US Open doubles title and eighth major doubles title of his career. It was Stepanek’s second major doubles win after claiming the 2012 Australian Open with Paes. Stepanek, 34, said the win enabled them to qualify for an important goal. “There is one thing we would like to achieve, and that’s winning the world championships at the end of the year, because that’s the trophy which is missing in Leander’s showcase,” the Czech said. Croatia made a clean sweep of the junior singles titles when Borna Coric and Ana Konjuh posted victories at Flushing Meadows. The fourth-seeded Coric beat Australia’s Thanasi Kokkinakis 3-6 6-3 6-1 in the boys’ final before second-seeded Konjuh beat US wildcard Tornado Black 3-6 6-4 7-6(6). Coric, 16, said the US Open would be his last junior tournament. “I’ve won the slam” he said about his Sunday victory. “That was the goal at the beginning of the year.” Coric has been named to Croatia’s Davis Cup team for the tie next week against Britain at Umag. Taylor Scott International