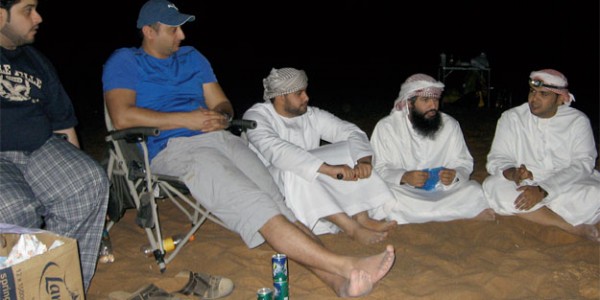 Sandy long weekend for UAE Silvia Radan / 8 June 2013 Sand has been a common feature for people relaxing in the country over the long weekend. The increasingly popular and newly opened Saadiyat beach, a fancy hotel somewhere by the sea, a drive to Oman for some wadi exploration or just staying put with movies and malls for passing time were the top choices for Abu Dhabi residents on how to spend the three-day weekend, with the Islamic holiday Isra Wal Miraj falling on Thursday. Hamad Al Kharoosi (first right) with fellow UAE Offroaders. — Supplied Photo Apart from overseas tourists, very few people here said they would consider a desert trip over the summer but Emirati Hamad Al Kharoosi breaks the mould. He and his family chose to spend much of this weekend in the sand dunes of Al Khatem, between Abu Dhabi and Al Ain. “I was there on Wednesday night for a night drive that ended with a barbeque (which lasted) until the wee hours and I’m going again on Friday afternoon,” said Al Kharoosi. He is a member of one of the biggest offroading clubs in the country —the UAE Offroaders. Recently upgraded to the topmost skilful level of driving -marshal- that comes with all sorts of responsibilities for the club, including organising trips for the fellow members, Al Kharoosi made sure to stay home this weekend to plan his desert trip. “It is the birthday of one of our UAE Offroaders’ founders and the club manager, so first of all I would like to say ‘Happy Birthday’ Lee Al Romaithi,” Al Kharoosi said. “To celebrate his birthday, I invited all club members who wish to join a desert drive in Al Khatem area. We will start about 4.30pm and stop at sunset, when we’ll have a barbeque, a big birthday cake and lots of laughs.” Al Kharoosi even undertook to prepare the barbeque by himself for the entire group, which are 16 drivers with their passengers. “One special thing about the UAE Offroaders is that we are very close to each other, always looking out for one another, so it feels like we are part of a family, not a club,” he added. Jane and Mathew Duplain, a young British couple enjoying the holiday on St. Regis Saadiyat hotel’s beach, said the long weekend had disrupted their plans. “We heard it’s a holiday for you here, but for us it’s a 10-day break. We came from London for our holiday here and we were actually planning a trip to Dubai (on Friday), but the concierge told us it would be very crowded, so we postponed it until (Saturday). We are going back to UK on Sunday,” Mathew said. “The beach today is pretty full, so I guess it didn’t really matter that we stayed here or went to Dubai. Mind you, the weather is lovely and even though the summer is slowly arriving in Europe as well, it will be a long time before we’ll enjoy such hot weather, so we are making the most of it,” added Jane. silvia@khaleejtimes.com Taylor Scott International