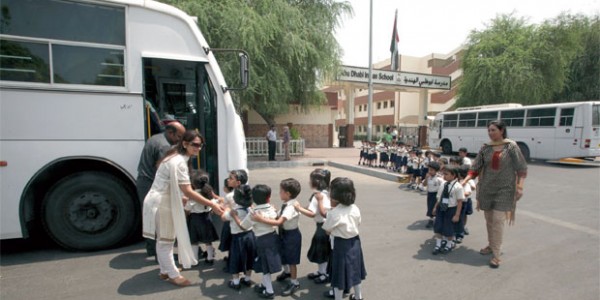 Safety takes front seat in Abu Dhabi school buses Nissar Hoath / 25 April 2013 The Department of Transport on Wednesday unveiled new regulations governing school bus transportation systems in the emirate to ensure safer and more comfortable commuting of children. “The new rules are aimed at providing safer, more efficient and convenient bus services for school children,” said the department in a statement. The new rules will make the school bus service more efficient. — KT file photo The DoT has allowed bus operators until the beginning of September to modify 50 per cent of their fleet, with the rest to be completed by September next year. No bus shall be registered, renewed, cancelled or given up unless with a permit issued by the DoT starting from May 1. In line with these regulations that have been determined as a top priority for the DoT, all schools must provide transportation services for their students either directly through their own-operated buses or via DoT-permitted and approved bus service contractors that abide by the set safety, reliability and quality service. School bus drivers should be holding a valid UAE licence issued for over a year, having a certificate of good conduct, able to speak Arabic or English in order to communicate effectively with students and parents and having accomplished DoT-scheduled training programmes. The department’s move was overwhelmingly welcomed by parents who were not happy with services where drivers and supervisors could not speak English or Arabic and were always in an unhygienic condition. They also blamed the poor conduct of school bus drivers and supervisors for the recent growing number of incidents of child abuse. “I have never been happy with these drivers and supervisors. There were many cases where these drivers and supervisors misbehave with children and use bad language. In some cases, they even used to beat children,” said Yasmin Ahmed, a mother of two. She also said these drivers also shout at parents if they are a few minutes late to drop children and reach the bus in the morning. Ismail Al Eraqi, another parent, also had similar complaints with the current private school bus drivers. He said: “They are not trained to deal with school children; they lack communication skills and use bad manners when it comes to dealing with minor students. I’m happy these drivers, who are practically fit for driving trucks, and supervisors are being replaced with the trained ones.” Abdul Qadir Al Balushi, an Abu Dhabi resident, said there should be a female supervisor in every bus that commute students from kindergarten to grade 5. “You hardly see any female supervisors in these school buses. They are all male. All the drivers and supervisors themselves have never been to school, so how can they take care of these minor students,” he said. According to the department, the new school transportation regulations have also identified schools’ responsibilities, requiring them to operate a sufficient number of air-conditioned buses for all students with separate buses for male and female students aged 12 and above, and if not possible, boys and girls must sit in separate areas. All the buses must have first aid kits and fire extinguishers under the new regulations with safe exit and entrance, while drivers are strictly prohibited from exceeding the speed limit allowed for each street, and must drive at maximum speed of 80kmph or less. Moreover, all school buses are to be equipped with Global Positioning System (GPS) to determine the bus locations, indicate speed and braking movements. School buses should also be fitted with electronic systems such as closed-circuit television networks with the ability to record audio and video as well as external cameras to monitor the buses from all angles. nissar@khaleejtimes.com Taylor Scott International