Public transport use expected to double by 2030 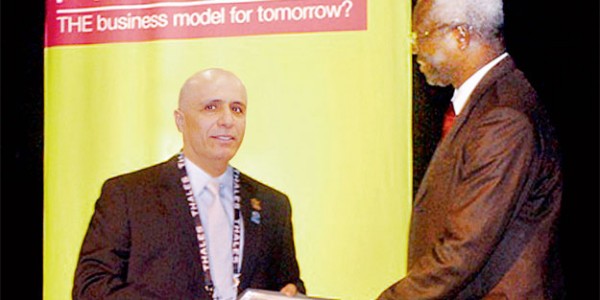 Public transport use expected to double by 2030 Staff Reporter / 2 June 2013 Footfall on the emirate’s public transport is set to double by 2030 through the construction of a 422km-long metro and tram network — a revamp which will catapult Dubai to the top of the world’s ‘Best Cities’ list. During the opening of the UITP Congress in Geneva, Switzerland, Chairman of the Board and Executive Director of the Roads & Transport Authority, Mattar Al Tayer, said the expansion project envisages a rise in passenger movement from 12 per cent in 2012, to 30 per cent in 2030. With population numbers set to rise in the region, the comprehensive and integrated public transport plan has been developed with a special focus on boosting the standing of Dubai as a safe and sustainable living place. “Population numbers in the region is expected to double in 33 years and the economy is set to grow by three per cent this year. These strong indicators show that the region is braced for more development and prosperity,” Al Tayer said. Mattar Al Tayer receives the award in Business Model Category for Metro Stations Naming Rights Project from Othman Tiam. — Supplied photo During his speech, which was hailed by senior executives who lauded the efforts and achievements made by the RTA, Al Tayer said “the infrastructure of transport is the prime mover of the economy and is an essential ingredient for the success of any city”. The plan will see marked improvements to the trains, buses and marine transit modes as well as traffic systems and road networks. Along with extending the metro and tram network in Dubai, the emirate’s bus and water transport network will undergo a face-lift to draw in more passengers. Referring to Dubai as “one of the world’s most important cities”, Al Tayer touched on the challenges facing public transport in the Mena region, with funding noted as the biggest sticking point. He accredited Dubai’s strategic geographic location — accessible to two thirds of the world’s population in less than eight hours — and its advanced investment and tourism environment, to overcoming these challenges. “Dubai is one of the safest cities worldwide … where 96 per cent of its population enjoy security and safety, and the traffic safety level in Dubai is also among the best in the world with 3.5 deaths per 100,000 people.” Noting Dubai Metro as the “backbone of the public transport system” in the emirate, Al Tayer said the key to ensuring successful implementation of the expansion project was through high-quality workmanship, adding that they will feature modern systems and facilities and high-end finishes. During the congress, the RTA picked up the Business Model Category UITP Award for the Middle East and North Africa (Mena) ‘Doubling the Share of Public Transport: 2xPT,’ through the Dubai Metro Stations Naming Rights Project. This first-of-its-kind revenue-generation model is a pioneering concept developed by the RTA offering partners in the private sector to own stations naming rights, in a bid to showcase their brands. The success of the concept has seen many other cities around the world follow suit with London, Barcelona and Delhi among some of those to introduce the initiative to their transport networks. The award was presented to Al Tayer by UITP President Othman Tiam. news@khaleejtimes.com Taylor Scott International