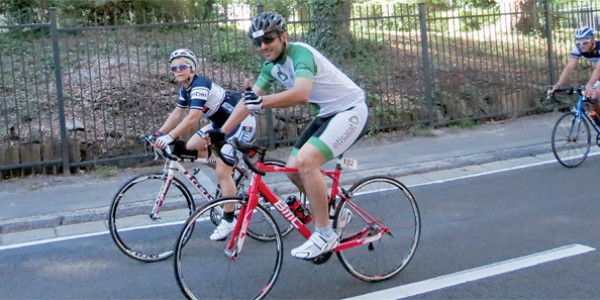 Pedalling for diabetes Asma Ali Zain / 6 September 2013 Three people from the UAE are pedalling across five countries in Europe for 13 days as part of a live observational study on diabetes. The tour is said to be the first of its kind live observational study that will answer important questions on diabetes and exercise as well as raise awareness and funds for the disease. Up to 36 riders from the world over — linked directly or indirectly with the condition — will be checked for the effects of multi-day endurance exercise on blood glucose levels. They will ride 2,100km with more than 22,000 metres of climbs to help demonstrate innovative solutions to the challenges of managing diabetes and enabling people to lead active lifestyles. Data from the ride is being captured using glucose monitors attached to the riders’ skin and transmitted to a research centre in the United Kingdom. The three participants from the UAE are part of a group of eight employees from Etisalat’s global operations who are taking part in the GSMA mHealth (mobile health) Grand Tour that took-off in Europe on Thursday. The UAE team is also representing Dubai Expo 2020. “The cycle tour is aimed at testing mobile technology and raising awareness of diabetes,” explained Stephen King from Etisalat while speaking to Khaleej Times from Brussels, Belgium. The group, led by Mobily’s Ali Al Shehri from Saudi Arabia represented ‘Team Etisalat’ at the starting blocks for the first stretch of the tour. By Thursday, 36-year-old Al Shehri had just headed east from Brussels, riding through Ardennes before crossing Luxemburg and meeting the Rhine near Saarbrucken, Germany. He was expected to hand over the pedals to colleagues from Tanzania and UAE who will take the team onto the next stage through the Black Forest and Alps mountains. Shehzad Ahmed and Mohammed Khairy along with Stephen will be taking over in the following stages until the tour ends in Barcelona on September 18. “The idea is also to raise awareness about mHealth or wellness applications that can be used through smart phones,” said Stephen. “This technology for managing diabetes could, at a later stage, be introduced in the UAE, as well,” explained Stephen. For the tour, Professor Mike Trenell from Newcastle University is working with people taking part in the tour, from elite athletes with Type 1 diabetes to people without diabetes. Volunteer riders are equipped with Garmin bike computers to track performance and a heart rate monitor to track heart rate throughout the tour. They have also been given state-of-the-art continuous glucose monitoring systems (CGMs) to look at how blood sugar levels change in athletes with and without diabetes. Professor Mike and his team will explore how riding affects blood sugar levels during the day and at night; how different athletes manage their diabetes (insulin and glucose); how high-performance athletes with Type 1 diabetes manage their diabetes compared with non-competitive athletes with Type 1 diabetes and how people with diabetes can teach athletes without diabetes about how to prevent low blood sugar levels during a ride. At least 18.9 per cent of the UAE population are living with diabetes. The tour is supported by International Diabetes Federation European Region. asmaalizain@khaleejtimes.com Taylor Scott International