Obama cancels US exercises, but not aid, with Egypt 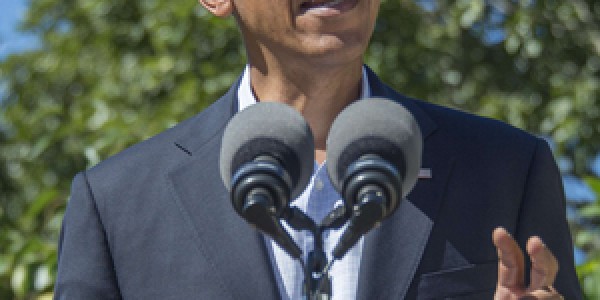 Obama cancels US exercises, but not aid, with Egypt (AFP) / 16 August 2013 US President Barack Obama on Thursday canceled exercises with Egypt’s military to protest the killing of hundreds of demonstrators but stopped short of suspending $1.3 billion in annual aid. Obama urged Egypt’s army-installed authorities to lift a state of emergency and allow peaceful dissent, saying he “strongly” condemned the crackdown on protesters. “While we want to sustain our relationship with Egypt, our traditional cooperation cannot continue as usual when civilians are being killed in the streets and rights are being rolled back,” Obama told reporters during his vacation on the tony island of Martha’s Vineyard. Obama said the United States had informed Egypt it was calling off the Bright Star exercise, which has been scheduled every two years since 1981. In 2009, more than 1,300 US troops took part in Bright Star, in which Germany, Kuwait and Pakistan also participated. But the exercises were also canceled in 2011 as Egypt was in the throes of the revolt that overthrew longtime strongman Hosni Mubarak, a close US ally. More than 500 people have died since Wednesday when Egyptian security forces, defying appeals for restraint by the United States and other powers, crushed pro-Mursi demonstrations. The United States has carefully avoided calling Mursi’s ouster a coup, a designation that would require the United States to cut assistance. Obama said that Mursi was “not inclusive” and that “perhaps even a majority” of Egyptians opposed the Muslim Brotherhood leader. “While we do not believe that force is the way to resolve political differences, after the military’s intervention several weeks ago, there remained a chance for reconciliation and an opportunity to pursue a democratic path,” Obama said. Instead, Obama said, Egypt has taken “a more dangerous path.” Defense Secretary Chuck Hagel, who has spoken more than 15 times to Egypt’s military chief Abdel Fattah Al Sisi since early July to counsel restraint, called him again Thursday to voice concern about the violence. But Hagel also said that the Pentagon “will continue to maintain a military relationship with Egypt.” Obama administration officials said they were reviewing US assistance to Egypt but made no announcements. Egypt has been one of the biggest recipients of US largesse since it signed a peace treaty with close ally Israel in 1979. Secretary of State John Kerry earlier praised the army and said it was “restoring democracy” by ousting the elected president, although he later backtracked on his remarks. Senator Rand Paul, a member of the rival Republican Party who is critical of foreign aid, urged an immediate termination of assistance. He charged that Egyptian forces were using US military vehicles to quell dissent. “While President Obama ‘condemns the violence in Egypt,’ his administration continues to send billions of taxpayer dollars to help pay for it,” Paul said in a statement. Democratic Senator Patrick Leahy, a frequent critic of military abuses overseas, also said that, as per US law, aid to Egypt “should cease until they restore democracy.” But a bid by Paul to end military aid to Egypt was easily defeated in the Senate on July 31, with much of his own party agreeing with Obama on Egypt. Israel has urged US policymakers to continue aid to Egypt, seeing it as vital to preserving the peace treaty and ensuring the military’s cooperation against Islamist hardliners. State Department spokeswoman Jen Psaki pointed to the “important role Egypt plays in regional stability” and acknowledged the limited impact of canceling the exercises. “I don’t think anyone in the government thinks that, certainly, the cancelation of Bright Star is going to change actions on the ground,” she told reporters. Faced with the violence, the State Department urged US citizens to defer travel to Egypt and leave if they are already there. Taylor Scott International