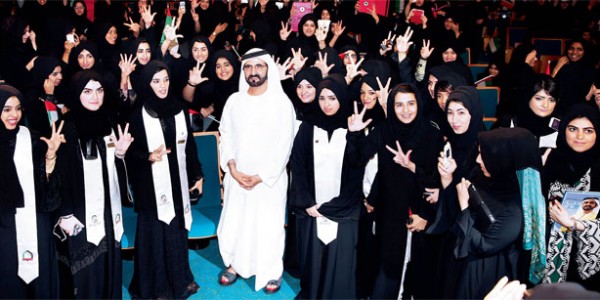 Mohammed hails students’ achievements (Wam) / 21 May 2013 His Highness Shaikh Mohammed bin Rashid Al Maktoum, Vice-President and Prime Minister of the UAE and Ruler of Dubai, on Monday praised students for their scientific, technical and cultural achievements. Interacting with students after inaugurating the new headquarters of the Ras Al Khaimah Women’s College (RAKWC), part of the Higher Colleges of Technology (HCT), he referred to the youth’s ambitions and strong will in learning and seizing opportunities given by their leaders who provide them with all financial and moral support to help them build their future and the future of their country. He wished the students success and progress in their education so as to achieve their goals and serve their country. Earlier, Shaikh Mohammed unveiled a special plaque upon his arrival at the Dh130-million building. The opening ceremony was attended by Shaikh Hamdan bin Mubarak Al Nahyan, Minister of Higher Education and Scientific Research; Mohammed Abdullah Al Gargawi, Minister for Cabinet Affairs; Mohammed Hassan Omran Al Shamsi, Chancellor of Higher Colleges of Technology and a number of senior  officials, faculty members and students. Shaikh Mohammed toured the various facilities and classes of the college beginning his tour with a visit to the public library where he took part in some student activities and signed several copies of his book “Flashes of Inspiration” which he dedicated to the library. He also visited some classrooms, where he attended part of lectures and training lessons. He familiarised himself with a new programme on designing websites and electronic games created by the students; he was also briefed by one of the students about the programme, the first of its kind in the UAE. At one of the classes, Shaikh Mohammed watched an electronic a programme featuring the success story of the HCT over the past 15 years before watching a video titled ‘Positive Energy’. Before wrapping up his tour, he visited the colleges’ gym, sports hall and the restaurant after which he met with the students at the colleges’ theatre where they welcomed him and expressed pleasure at his fatherly visit. Taylor Scott International