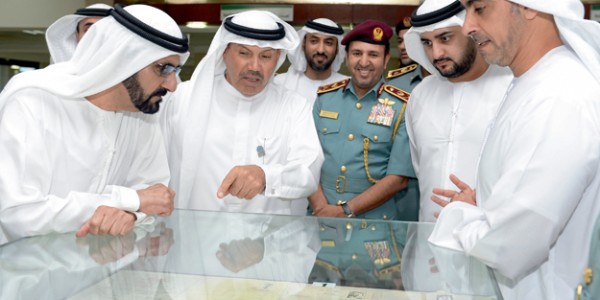 Mohammed: Bureaucracy inhibits innovation (Wam) / 19 August 2013 His Highness Shaikh Mohammed bin Rashid Al Maktoum, Vice-President and Prime Minister of the UAE and Ruler of Dubai, has said bureaucracy and routine are counter-productive and inhibit innovation and excellence, referring to the importance of developing government administrative work. “Let us be advocates of innovation and excellence. Our mission is to join forces and make our beloved country rank top globally in terms of services provided to citizens,” he said, as he paid an inspection visit to the General Directorate of Residency and Foreigners Affairs in Dubai (GDRFA) on Sunday. Shaikh Mohammed, Shaikh Maktoum bin Mohammed and Lt-Gen Shaikh Saif bin Zayed looking at the old passports displayed at Al Dana Museum in the General Directorate of Residency and Foreigners Affairs in Dubai on Sunday. — Wam  Shaikh Mohammed underlined the significance of tolerance and respect for the rights of people irrespective of their religion or ethnicity, stressing the value of enriching the welcoming experience for visitors who enter the country by means of air, sea and land. During the visit, Shaikh Mohammed was briefed on the efforts being made to streamline workflow at the directorate. He was accompanied by Shaikh Maktoum bin Mohammed bin Rashid Al Maktoum, Deputy Ruler of Dubai; Lt-General Shaikh Saif bin Zayed Al Nahyan, Deputy Prime Minister and Minister of Interior; Lt-General Musabbah Rashid Al Fattan, Director of the Office of the Vice-President and Prime Minister and Ruler of Dubai; Khalifa Saeed Suleiman, Director- General of Dubai Protocol and Hospitality Department; Major-General Nasser Lakhraibani Al Nuaimi, Secretary-General of the Office of the Deputy Prime Minister and Interior Minister; and a number of senior officials. Shaikh Mohammed was also accompanied during his tour to the departments and sections GDRFA Director-General Major-General Mohammed Ahmed Al Marri, who briefed him on the transactions carried out by various sections at the department. Al Marri pointed out the efforts and technology adopted by the GDRFA to streamline workflow with aims to reduce transaction time to a minimum and raise output. Shaikh Mohammed stopped at the Entry Permits and Visa Department, where he was briefed on the daily work carried out by the employees before visiting the Online section where transactions are processed swiftly. Shaikh Mohammed inspected the numerous facilities designed to make people’s visit to the department as comfortable as possible such as the waiting places dedicated for women. He also stopped at Al Dana Museum within the GDRFA headquarters which displays passports dating back to the establishment of the UAE. The Electronics Services Department was the next stop where Shaikh Mohammed listened to a briefing on the various projects carried out by the department such as the electronic link project with different Dubai Government entities. The department successfully processed over five million e-Transactions and received over 500,000 SMS service requests through “Jadid” service last year. During the first quarter of this year, the GDRFA processed more than three million e-Transactions and received more than 400,000 SMS service requests. He also stopped at the Call Centre operated by GDRFA staff. Shaikh Mohammed expressed satisfaction with the high level of proficiency the GDRFA staff had and their dedication to their work which, in turn, reflected the civilised and advanced status of public services in the UAE. Taylor Scott International