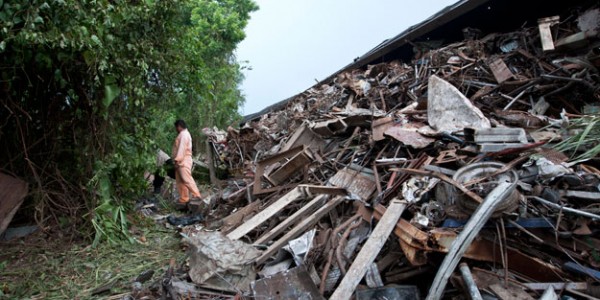 Mexico train derailment kills 6 (AFP) / 26 August 2013 A cargo train carrying US-bound migrants derailed in a remote and swampy area of south eastern Mexico on Sunday, killing at least six people and injuring several more, officials said. National civil protection coordinator Luis Felipe Puente said on his Twitter account that 18 people were taken to hospitals, including 17 from Honduras and one from Guatemala, all aged 19 to 54. He had said earlier that 22 people were injured. Security and civil protection officials in the municipality of Huimanguillo said 250 to 300 people were aboard the train when it crashed at a site far from any road and only accessible by air or boat. A Tabasco government spokesman told AFP that four of the dead were from Honduras. Tabasco civil protection director Cesar Burelo told Milenio television that the injured were taken to the regional hospital of Las Choapas in the neighbouring state of Veracruz, which is 25 minutes away by boat. The cause of the accident was not yet known, he said, adding that the train was also carrying scrap metal. Mexican media said the train may have been travelling too fast amid heavy rain. Eight of the train’s 12 freight cars overturned at around 3:00 am (0800 GMT), state officials said. Rescuers used hydraulic tools to cut through the metal to find survivors. Burelo said cranes will be needed to lift the wagons, which could lead to discoveries of more fatalities. Local media showed pictures of freight cars lying on their side with the wheels detached from the bottom. The tracks are seen in a wooded area and covered with plants. At least two of the injured were transported lying on the wooden flatbed of a handcar — a small four-wheeled railroad vehicle — according to a picture posted on Twitter by Tabasco civil protection. President Enrique Pena Nieto expressed his condolences to the families of the victims and his foreign ministry said it was providing information to Central American embassies. President Enrique Pena Nieto unveiled a $309 billion plan in July to modernize the country’s infrastructure, including by reviving the nation’s passenger train service.   Taylor Scott International