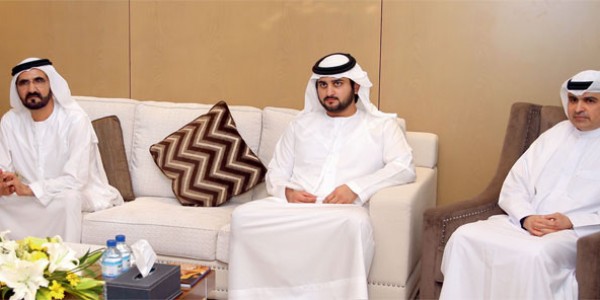 Media role vital: Shaikh Mohammed (Wam) / 8 June 2013 His Highness Shaikh Mohammed bin Rashid Al Maktoum, Vice-President and Prime Minister of the UAE and Ruler of Dubai, met a host of professionals representing international media establishments operating in the UAE. Shaikh Mohammed, Shaikh Maktoum bin Mohammed and Sami Al Qamzi during the Media Majlis at the Government of Dubai Media Office headquarters. — Wam The meeting, at the headquarters of the Government of Dubai Media Office (GDMO), was held in the presence of Shaikh Maktoum bin Mohammed bin Rashid Al Maktoum, Deputy Ruler of Dubai and Chairman of Dubai Media Incorporated (DMI); Mona Ghanim Al Marri, Director-General of the Government of Dubai Media Office (GDMO); and Sami Al Qamzi, Vice-Chairman and Managing Director of DMI The second meeting, held as part of the Mohammed bin Rashid Media Majlis, tackled several important local issues, the most prominent achievements made by the UAE as well as other issues targetted during the next phase in order to achieve glory to Emirati citizens and progress to society aimed at taking the country to No1 position in various fields. Delegates representing foreign newspapers and international news agencies operating in the country participated in the meeting which stems from Shaikh Mohammed’s keenness to broaden the circle of constructive communication between the leadership and the media and to create a platform of open and direct discussion and communication between members of the media and Shaikh Mohammed in a friendly atmosphere. During the meeting, Shaikh Mohammed listened to opinions put forward regarding a number of issues, stressing the important role of media as a prime and positive partner of the society and as a channel that reflects and resonates the aspirations of society and highlights the views of its members.  Shaikh Mohammed acknowledged the contribution of the media as an important driver of progress of civilised societies, noting the significant role played by the international media institutions in building bridges of communication between peoples through their achievements in print, audio or visual media. Shaikh Mohammed assured media professionals of the cooperation of government institutions. In this context, he said that he had given explicit and clear directives to all officials at the federal government as well as the Dubai government levels to strengthen bridges of constructive and positive cooperation with various media entities, thus recognising the principle of full transparency and informing people about developments within the various sectors, affirming his approval with any effort that seeks to publish the truth, while inviting all the media, via the various media channels, to always seek to adopt the highest professional standards and to exercise best practices, particularly in terms of full accuracy when reporting any news story. The meeting also touched upon the UAE’s bid to host “Expo 2020” in Dubai. In this regard, Shaikh Mohammed confirmed that the essentials the UAE possesses and included in the UAE file submitted to the International Exhibitions Bureau in Paris, the organiser of the EXPO — enhance our confidence and increase our opportunities to win this global event which will have its great economic and cultural impact on the UAE and the Arab region as a whole. Taylor Scott International