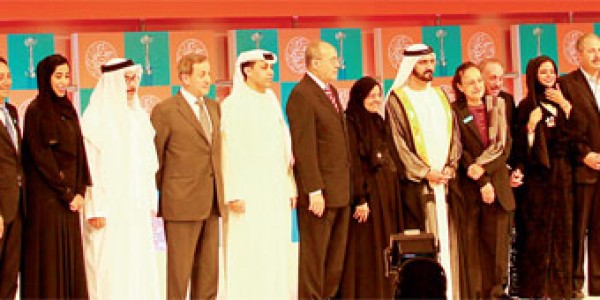 Media achievers honoured Staff Reporter / 16 May 2013 Media achievers were honoured on the concluding day of the Arab Media Forum on Wednesday by His Highness Shaikh Mohammed bin Rashid Al Maktoum, Vice-President and Prime Minister of the UAE and Ruler of Dubai. Shaikh Mohammed presented a special award to the Chairman of the AJA Board of Directors, Khalfan Al Roumi, which was received by his daughter Ohood Al Roumi on his behalf, in appreciation for his contributions as one of the prominent founders of journalism in the UAE and for his role in establishing and developing the AJA project since 1999. It earned the Award its current prestigious position and impartial reputation as a platform for fair competition in the Arab world. Shaikh Mohammad with the winners of the Arab Journalism Award and officials during the award ceremony on the concluding day of the Arab Media Forum in Dubai on Wednesday. — KT photos by Rahul Gajjar A national figure, Al Roumi has participated at the preliminary committee for establishing the United Arab Emirates. He was one of the members of the delegation visiting a number of Arab countries to explain the rationale behind establishing the UAE federation. He assumed a number of ministerial positions that include posts as Undersecretary of the Ministry of Education, Minister of Health, Minister of Labour and Social Affairs, as well as Minister of Information and Culture. Moreover, he represented the country at many Gulf, Arab and Islamic forums and conferences. Courtesy: Youtube.com/Sheikhmohammed.ae Shaikh Mohammed also presented the Media Personality of the Year Award to Egyptian TV and Radio presenter Hamdy Kandeel in appreciation for his efforts in serving Arab Media throughout his career as a writer, lecturer, diplomat and a political activist, defending issues of concern to Arabs in the Middle East from such influential positions as the Director of the Arab States Broadcasting Union (ASBU) Middle East Manager and the director of Free Flow of Information and Communication Policies at Unesco, Paris. The “Best Newspaper Column” award went to the Lebanese columnist Hazem Saghieh known for his articles in “As-Safir” newspaper, 1974, and “Al-Hayat” daily, 1988. During his early career, Saghieh served as editor for the quarterly publication “Abwab”, then, moved to work as editor for Beirut-based quarterly cultural publication “Kalamon” that covers political, cultural and social issues in Lebanon and in the region; in addition to publishing a number of books that tackled topics on political and cultural lives in the Arab world. AJA Board Member Mohammad Yousuf presented the “Investigative Reporting” award to Abdul Wahab Aleiwa of “Al Wafd” Egyptian newspaper for his feature tackling the issues of smuggling arms to Egypt. His Highness Shaikh Mohammed bin Rashid Al Maktoum, Vice-President and Prime Minister of the UAE and Ruler of Dubai, presenting ‘Media Personality of the Year Award’ to the Egyptian TV and Radio presenter Hamdi Qandeel at the gala ceremony of the 12th Arab Journalism Award in Dubai on Wednesday. — KT photo by Rahul Gajjar AJA Board Member Raed Barqawi presented the “Economic Journalism” award to Khalid Al Biheiri of “Al Roya” Omani newspaper for his article that revolves around the involvement of a third party in determining the features of trade exchange between Arab and Israel. AJA Board Member Dhaen Shaheen presented the “Political Journalism” award to Othman Lehyani, of the Algerian newspaper “Al Khabar”, for his article on Salafis in Tunisia. Presenter of “Al Bayan” local newspaper, Nidal Hamdan received from Board Member George Samaan the “Press Interviews Journalism” award for his feature about Iran provocation that contrasts with its policy of friendship and good neighbourliness with Gulf States. Shaikh Mohammad presenting the special award meant for Khalfan Al Roumi to the latter’s daughter, Ohood Al Roumi, and (right) the award for the Best Newspaper Column to Hazem Saghieh. Vice-Chairman of the International Humanitarian City (IHC) Board of Directors Ibrahim Bu Melha presented the newly introduced ‘Humanitarian Journalism’ award to Hanan Khunduqji, of the Jordanian newspaper ‘Al Ghad’, for her distinguished work on physical and verbal abuse of special needs at care centers. AJA Board Member Nasser Al Dhaheri handed out the award of ‘Specialized Journalism’ to Rasha Abu Zaki from the Lebanese “Al Akhbar” newspaper for her special report on Lebanon. Board Member of AJA, Ahmed Behbehani gave away the ‘Sport Journalism’ award to Amin Al Dobali from “Al Ittihad” newspaper for tackling the issue of steroids in sports; after which photographer Alaa Badarneh of EU Agency News received Best Picture award from AJA Board Member Dr Ahmed Abdul-Malik. Dr. Hessa Lootah, AJA Board Member, presented the ‘Outstanding Cartoon Works’ award to Syrian cartoonist Raed Khalil; whereas Vice-Chairman of AJA Mohamed Barakat presented the Young Journalist awards to three winners: Huda Baroud of the Palestinian newspaper “Palestine”, Haitham Mahjoub of Egyptian newspaper “Al Masry Al Youm” and Esmahan Al Ghamedi of the Saudi newspaper “Al Riyadh”. news@khaleejtimes.com Taylor Scott International