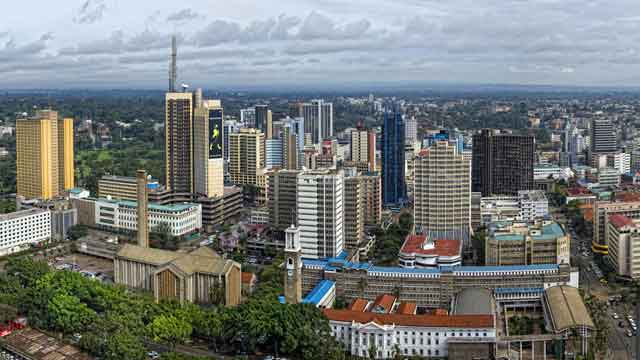 Kenya’s Real Estate Market is easy to confuse investors. People following the rule of demand and supply believe that the Real Estate Market in Kenya is still strong and has a long way to go. Well sometimes things are not so simple. Kenya has a huge need for housing, but for affordable housing. The Kenyan economic growth did not follow the pace of growth of Real estate prices over the last years.

The property market has reached levels completely out of range for the Kenyan family. Middle class is the main excuse that real estate speculators are using to explain and support the argument that the market is strong, the reality is that there is a small part of the Kenyan population that consists of Kenya’s “middle class.” In real terms though, this middle class unfortunately has still very low affordability. In Nairobi, a well paid employee is making on average 40-50000 KES … (450-550 USD), that makes it impossible to pay a mortgage on a monthly installment or to save enough money to buy any property on cash basis.

Trapped in between a very expensive cost of living in Nairobi and debts (car loans etc), the average family is struggling to survive and lives on a day by day basis. Today, the cheapest three (3) bedroom apartment in Nairobi County is selling at about KES. 4.5 million (Approximately USD.50, 000). Very few people have this kind of money in cash and mortgage is a very difficult option in Kenya. (Kenya has less than 20,000 mortgages).

High mortgage rates is one of the reasons that have led to a slowdown in the property market over the last few months. Potential home owners delay buying decisions waiting for the interest rates and prices to reduce. Having bug liabilities of loans with interest rates that exceed 20%, developers are trapped in a market that is slowing down. They are struggling to maintain the prices which are already starting to depreciate.

The average Kenyan family makes up the lower and the middle class (approx…80% (L) & 15 % (M)), of the population respectively, and are creating a huge demand for affordable housing. Sadly, only expensive options are currently available in the Kenyan market. Like any other market, any continuous growth has to be supported by a strong economy. The last 5 years have seen the average house price increasing by at least three to four times. Within the same period, the number of apartments and houses delivered from developers have also increased tremendously. In order to sustain this market growth, we need to use common sense and simply require the following:

A. The average income of a Kenyan family should have increased with the same ratio (3 to 4 times at least).

B. In order to cover the available market supply, we should have a tremendous increase of the number of families who can afford to buy a house with today’s prices.

Unfortunately none of the above has happened. So far, people have been spending their life savings and have been borrowing money with crazy interest rates in order to be part of the real estate “opportunity” of Kenya. It seems that there is not much cash left in the saving accounts of the average Kenyan family….

Money has changed hands from the poor to the rich. Foreign investors are not an option either due to lack of infrastructure, low quality, security issues, instability etc. The Diaspora who have supported from their part the market for the last years cannot (alone) maintain the huge Kenyan market.The Real Estate Market started to cool down a few months ago. Developers who initially started projects based on the off plan sales model, are trapped in between loans and obligations as it takes on average more than 8 months to sell a new apartment.

Rentals are going crazy high. The reason is very simple. It is not that the real estate is growing, people cannot afford to buy, the only other option is to rent. This is driving rental prices high and soon they will be unaffordable for the average Kenyan family. It is not a secret anymore that families are going back to their home cities as Nairobi is becoming a very expensive place to live, the reason why “bedsitters” is the new trend in the Kenyan market.

Real estate investors’ interest in building and buying bedsitters is increasing because the units offer a faster return on investment and higher financial liquidity. Consequently, property developers are left with a cash hitch and glut in high-end and middle-income units, prompting them to venture into bedsitters which are easier to sell or rent.

There is only one way this market can stabilize and keep going on, prices have to meet affordability and that requires a large price correction. A severe decrease of mortgage interest rates is also necessary. People must realize that it is impossible for any country’s economy to be based on Real Estate therefore, they should start investing in the real economy of Kenya i.e. Agriculture, Tourism, Transportation etc.

Kenya has an amazing human resource power which should be used to start producing and exporting instead of importing. Real estate is an industry that requires knowledge, experience, assets, time and the ability to follow the markets, analyze them and always be ready to take a loss. Markets based on amateurs are very fragile.

Real estate sounds like the way to access easy profits, sometimes it is, most of the times though, it is also the easy way to lose money as well. Even today, the market has opportunities for those who know, but the risk factor is something to be considered a lot.

Anyone who wants to invest big or small in this market should be careful. Analyze properly all the macroeconomic as well as microeconomic facts of Kenya (The same applies for any other country too). Consideration should also be directed to the current security and Political situation as well as the currency fluctuation. Many people investing their life savings have never even heard of terms like GDP, Inflation, Public Debt etc, and that is a sign of how dangerous the market can be if it is controlled by rumors and not knowledge.

Below are Kenyan economic facts from the latest published Monthly Economic Review for Kenya (June 2014) prepared by the Central Bank of Kenya.

The Kenya shilling portrayed mixed performance against major international and regional currencies during the month of June 2014. It weakened to the US Dollar, the Pound Sterling and the Japanese Yen.

This entry was posted in News and tagged africa, kenya, property, real estate. Bookmark the permalink.