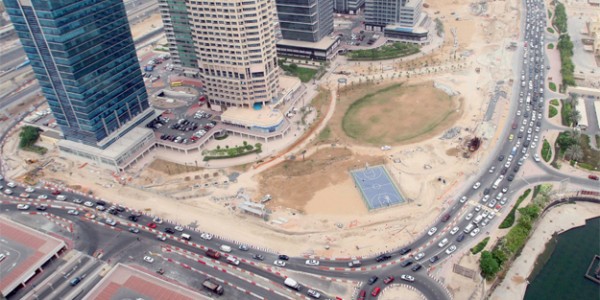 JLT motorists caught in jam Muaz Shabandri / 10 September 2013 Thousands of motorists were stuck in their cars on Monday morning after traffic came to a standstill in the Jumeirah Lake Towers community. Some motorists spent more than two hours in their cars as traffic backed up from Shaikh Zayed Road leading up to the entire stretch of the road going around the community. The slow-moving traffic at the JLT roundabout in Dubai on Monday. — KT photo by Leslie Pableo Police officers confirmed the incident on Twitter as Dubai Police tweeted, “Broken down vehicle is causing traffic congestion at JLT.” Rush hour traffic continued late on Tuesday evening also as motorists complained similar traffic snarls in the same area. Some motorists complained that a major roundabout in the middle of the development was closed and traffic from three different roads was being rerouted to one exit. “It usually takes me seven minutes to reach office from my house in Emirates Hills. On Monday, it took more than two-and-a-half hours and it was absolutely chaotic. There were no signs explaining which roads were closed,” said Manjari Khatwani who works for an international media company in JLT. Most motorists in the area were unaware as limited traffic signs and new road diversions added to traffic problems. Offices in JLT were severely affected as the so-called ‘planned road closure’ had choked access to buildings in the area. Security staff working in the area were seen directing traffic towards an exit leading to Shaikh Zayed Road as teams from civic authorities also rushed to the site. Rami Salame works for an advertising agency in the area. He called on authorities to plan better and help avoid such situations. “There can’t be three or four roads leading to one exit. Someone has to take responsibility for better planning and build more access and exit points in the area,” he said. JLT’s master developer, Dubai Multi-Commodities Center, was tight-lipped about the traffic crisis.  The Roads and Transport Authority (RTA) also did not reply to questions by Khaleej Times . muaz@khaleejtimes.com Taylor Scott International