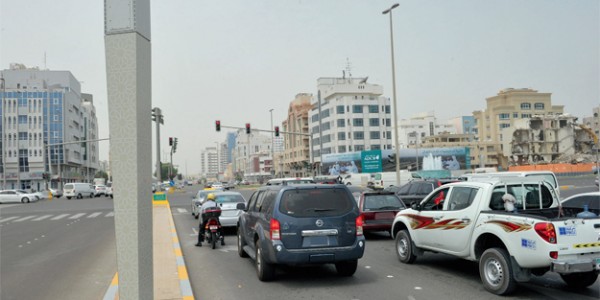 Infrared cameras catch motorists unawares Staff Reporter / 27 August 2013 Traffic signals using infrared surveillance cameras are catching unaware errant motorists jumping red lights and speeding through amber lights in the country’s Capital. The cameras, which function using a hi-tech system, uses infrared beams without a flash to capture road violators. Due to the number of drivers being caught out by the cameras, the Traffic and Patrols Directorate of Abu Dhabi Police have called on motorists to reduce speeds when approaching road signals in order to avoid risking their life and the lives of other road users. The infrared–run surveillance cameras also monitor and capture the wrong use of vehicular traffic lanes, motor vehicles stopping on pedestrian crossings, and motorists committing illegal turns in the road. Director of the Directorate Brigadier Hussein Ahmed Al Harithi, warned of jumping red signals, and added that people on their mobile phones often commit the violation. “Such mistakes often result in material losses and human casualties”, he said, noting that, priority is given to traffic travelling in other directions when the red light is on. He said the surveillance system on road junctions in Abu Dhabi, which had been enforced by the Directorate since the beginning of 2012, is an integrated project and aims to improve traffic safety at the junctions. Accordingly, he said for five years, surveillance cameras have been installed on more than 150 road intersections in Abu Dhabi, Al Ain and the Western Region. “The vehicular traffic surveillance system is one of the modern systems which conducts a continuous evaluation to the engineering condition of the road junctions and their impact on traffic safety as well as the occurrence of road accidents”, he said, and is linked to the Directorate’s reports system, SMS and convertible message systems. The surveillance cameras span more than five lanes in each direction of the road, and has several functions including reading all number plates, identifying the number of vehicles on the road, noting the average speed limit, and identifying the number and directions of the pedestrians while traffic signals turn green and red. The Directorate is making huge efforts to curb traffic accidents, and has intensified traffic awareness through the Abu Dhabi Traffic Programme called “Together”, on Facebook, Twitter and YouTube.   news@khaleejtimes.com Taylor Scott International