Indiana’s Farmland Values Up Again In 2013 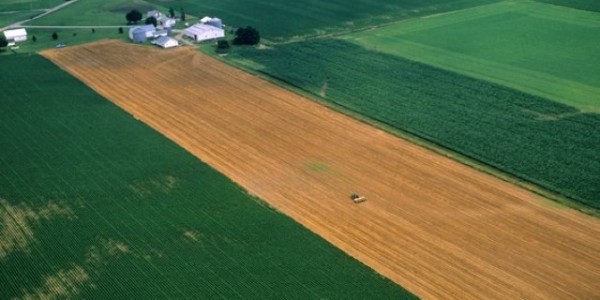 Thursday, August 29, 2013 WEST LAFAYETTE, Ind. — Last year’s drought did little to slow the pace of rising farmland values and cash rents. They are up this year in a big way again, according to a Purdue University study. Drought last year sent corn and soybean prices soaring to all-time highs, which, along with crop insurance indemnities, meant better-than-expected farm incomes. High net farm income, low interest rates and high farmland demand with limited supply combined to push the state’s land values upward by anywhere from 14.7 to 19.1 percent, depending on productivity. Statewide cash rents increased by 9.4 to 10.9 percent. “While the 2012 Indiana crop suffered from the worst drought since 1988, the increase in farmland values did not bother to slow down,” said Craig Dobbins, Purdue Extension agricultural economist. The biggest increases were in high-productivity land, which jumped by 19.1 percent to $9,177 per acre. Average-productivity land increased 17.1 percent to $7,446 per acre, and poor-productivity land was up by 14.7 percent to $5,750 per acre. Land values, cash rents and farmland productivity were estimated for the study by surveying Indiana rural appraisers, agricultural loan officers, Farm Service Agency personnel, farm managers and farmers. The 261 respondents were asked to estimate long-term corn yields for poor, average and top-quality land. The state’s average long-term corn yields for poor, average and top-quality land were 127, 160 and 193 bushels per acre, respectively. Another area that saw growth is the transitional land market, Dobbins said. “The transitional land market — that is, farmland moving out of agriculture — seems to have sprung back to life,” he said. “This is a specialized market, with transitional land value strongly influenced by the planned use and location.” Overall, the survey showed a 24.4 percent increase in average transitional land value, up to $10,581 per acre. However, the estimated values from the 2013 survey varied widely — from $2,500 to $45,000 per acre. The median value was $9,500 per acre — $1,500 per acre more than in 2012. “Because of the wide variation in transitional land values, the median value might give a more meaningful picture than the average,” Dobbins said. Cash rents increased statewide, with the largest jump found in high-productivity land. Top-quality land increased by 10.9 percent or $29 per acre. Rent for average-quality land was up by 10.1 percent, or $21 per acre, and rent for poor-quality land was up 9.4 percent, or $15 per acre. The survey also assessed expectations for where farmland values and cash rents are headed in the future. Dobbins said the consensus is that increases will slow and, in some regions, values might stall or decline slightly. Forty-three percent of the survey participants said they thought farmland values would increase by an average 11.7 percent over the next five years. That means they expect an average annual increase of 2.2 percent. Thirty-five percent of the respondents thought farmland values would decline by an average of 12.3 percent over the next five years — an annual decline of 2.3 percent. The remaining 22 percent expected no change. Taylor Scott International