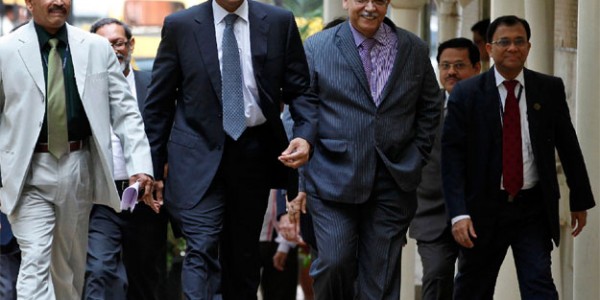 Indian rupee, stocks jump on new bank chief’s plans (AFP) / 5 September 2013 India’s rupee strengthened and stocks jumped on Thursday after new central bank governor Raghuram Rajan outlined a reform plan aimed at boosting investor confidence and stabilising the ailing currency. Raghuram Rajan, second left, the newly appointed governor of Reserve Bank of India, is received by its Deputy Governor Kamalesh Chandra Chakrabarty, second right, and others as he arrives at the RBI headquarters in Mumbai, India. AP The rupee climbed to 65.75 against the dollar, gaining nearly two percent from its previous close, on investor hopes the worst could be over for the currency, the worst performing in Asia this year. Indian shares jumped as much as 2.96 percent at the open, led by banking stocks, after Rajan took over Wednesday from Duvvuri Subbarao as head of the Reserve Bank of India (RBI). In the afternoon stocks were up 1.51 percent. Rajan sought to reassure rattled markets with his first speech in the post, outlining a fresh approach to the currency crisis and warning that he may have to take unpopular steps to get Asia’s third largest economy back on track. Sonal Varma, an economist at Nomura Securities, said Rajan had made “an impressive start” but she stressed that a weak growth outlook was still a “major concern”. “In our view, amid the current gloom, the new RBI governor has infused a sense of optimism that he is in charge and that the RBI under him will unleash more financial sector reforms, a medium-term positive for the economy,” she said. Rajan, a former IMF chief economist, emphasised the importance of transparency and consistency in the bank’s actions, after the RBI spent weeks trying to stabilise the rupee with a range of measures. He stressed he would hew to the RBI’s mandate of “securing monetary stability” and sustaining confidence in the value of the country’s money. “This means low and stable expectations of inflation, whether that inflation stems from domestic sources or from changes in the value of the currency, from supply constraints or demand pressures,” he said. India faces its worst financial crisis in decades, as the once-booming economy grapples with sharply slowing growth, high inflation and a record current account deficit. Some analysts fear the economy could be heading for a meltdown with the rupee down around 22 percent against the dollar this year. Rajan’s bold entry to the job, which included financial deregulatory measures such as opening up the country’s banking sector, received rave reviews from economists and the local media. “This was easily the most substantive speech by a Reserve Bank governor on his first day in office,” financial daily Business Standard said on Thursday. With a mock photograph of Rajan in a James Bond-style pose on its front page, The Economic Times newspaper said he had “gotten off to a good start, radiating brisk purpose and optimism”. Rajan, famed for forecasting the 2008 global financial crisis, left his post as a professor at the prestigious University of Chicago’s Booth School of Business and returned to India last year before taking up the new job. Taylor Scott International