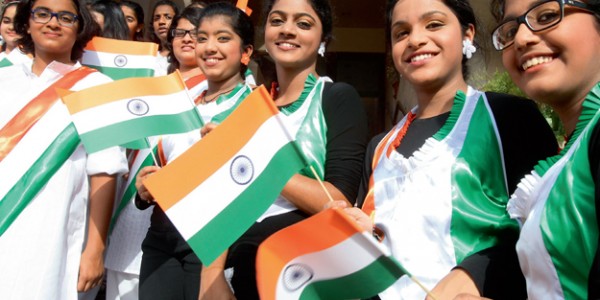 Indian expats wear their tricolour on the sleeves Olivia Olarte-Ulherr  & Nivriti Butalia / 16 August 2013 Hundreds of Indian expatriates sang their national anthem as their envoys and leaders hoisted their national flag signalling the beginning of the 67th Independence Day celebrations at the Indian Embassy in Abu Dhabi, Consulate in Dubai and also at community associations across the country on Thursday morning. Girls hold their national flag as part of the Independence Day celebrations held at the Indian Embassy in Abu Dhabi and, below, the Consulate in Dubai on Thursday. — KT photos by Shoaib Anwer and Mukesh Kamal There was a good turnout at the Indian Embassy in Abu Dhabi, where the flag was hoisted by Indian Ambassador M. K. Lokesh. Students from the Abu Dhabi Indian School sang the national anthem and a short cultural show by the students followed. At 7.50am at the Indian Consulate in Dubai, Consul-General Sanjay Verma, wearing a black bandhgala, unfurled the national flag. The ceremony had at least 500 members present from the Indian community, the majority wearing colours of the national flag and dressed in traditional attire. The tricolor was also hoisted by Indian communities in Sharjah, Ajman, Ras Al Khaimah, Fujairah, Umm Al Quwain and Kalba. In Dubai, Verma commenting on the diversity and pluralism of Indian culture, said there must be (in the auditorium) speakers of at least 40-50 Indian languages. Edwin, who has lived with his family for 20 years in Abu Dhabi, said he was very proud of his country and what it had achieved. The Independence Day celebrations for him meant that “we ran and established the country on our own reaching these heights”.  “It’s a great joy for me that India enjoys a good stature in the world market today and is known for its economic boom, education, science and technology.” Verma in his speech requested the audience to not lose heart at the state of the economy and the crisis in governance and other issues that plague India. He read out excerpts of the president’s address on the eve of Independence Day. And he also spoke of India’s healthy bilateral relations with the UAE. He congratulated the Indian community for their contribution to the two nations, India and the UAE, and  spoke about India’s diversity and inclusive national model. He  stressed that India was stronger than ever before in its history and prepared to deal with any challenge that came its way. In his speech read out during the ceremonies, Indian President Pranab Mukherjee said, “For a developing country of more than 1.2 billion people, the debate between growth and redistribution is vital … The last decade has seen India emerge as one of the fastest growing nations in the world. During this period, our economy grew annually at an average rate of 7.9 per cent. “We are today self-sufficient in food grain production. We are the largest exporter of rice and second largest exporter of wheat in the world. The record production of 18.45 million tonnes of pulses this year augurs well for our march towards self-sufficiency in pulses… This momentum has to be sustained. In a globalised world, with increasing economic complexities, we have to learn to cope better with adversities, both external and domestic.” On security, he said, “Our commitment to peace is unfailing but even our patience has limits. All steps necessary to ensure internal security and protect the territorial integrity of the nation will be taken.” Noting today’s “widespread cynicism and disillusionment” with the governance and institutions, and the challenges of corruption, Mukherjee urged his compatriots to “elect a stable government which will ensure security and economic development” in the coming elections. Indian Prime Minister Manmohan Singh, whose speech was also read out, said despite the country’s progressive journey in the past ten years, “much remains to be done. The process of change that we have initiated will be continued in the coming time”. He cited the enhanced economic prosperity in rural areas, the double numbers of young men and women going to college and the strengthening of the law dealing with offences against women. “If in the future we can achieve the same kind of progress as in the last decade, the day is not far off when India will be rid of poverty, hunger, disease and ignorance. Our India will be prosperous and all its citizens will be equal partners in this prosperity, irrespective of their religion, caste, region or language,” he pointed out. At the Dubai Consulate, patriotic songs were sung by four different singers. While Chhavie Sahay rendered her take on ‘Saare jahan se achha’, the highlight of the morning was Assamese singer Deepa Bordoloi, along with Utpal Baruah on the guitar.  A four page print-out of the president’s speech in Hindi was distributed to the attendees at the Consulate that ended with Jai Hind.— news@khaleejtimes.com Taylor Scott International