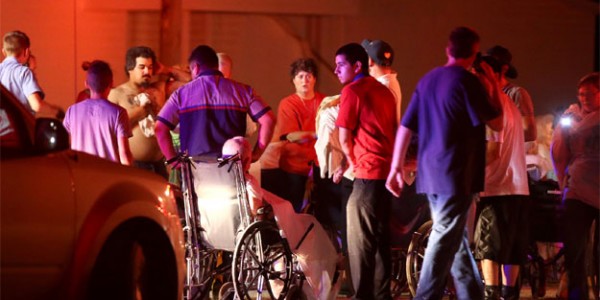 Deadly explosion, fire rips through Texas fertilizer plant (Reuters) / 18 April 2013 A deadly explosion ripped through a Texas fertilizer plant near Waco late on Wednesday, injuring more than 100 people, leveling dozens of homes and damaging other buildings including a school and nursing home, authorities said. Elderly persons from a nearby nursing home are triaged in a parking lot before being moved to a school stadium following a fertilizer plant explosion in Texas. AP They said an undetermined number of people had been killed, and that the death toll was expected to rise as search teams combed through the rubble of the demolished plant and surrounding homes. “We do have confirmed fatalities,” Texas Public Safety Department spokesman D.L. Wilson told a news conference about four hours after the explosion. “The number is not current yet. It could go up by the minute. We’re in there searching the area right now and making sure that it’s safe.” The blast, apparently preceded by a fire at the plant, was reported at about 8 p.m. CDT (0100 GMT on Thursday) in West, a town of some 2,700 people about 80 miles (130 km) south of Dallas and 20 miles (32 km) north of Waco. West Mayor Tommy Muska told Reuters that five or six volunteer firefighters who were among the first on the scene in the blast zone were unaccounted for. CNN reported that at least three people had been killed, but that figure could not be independently confirmed. “It’s a lot of devastation. I’ve never seen anything like this,” McLennan County Sheriff Parnell McNamara said. “It looks like a war zone with all the debris.” Wilson said 50 to 75 homes were damaged by the explosion and a fire that followed, and that a nearby 50-unit apartment complex had been reduced to “a skeleton standing up”. Muska put the number of destroyed homes at between 60 and 80. Wilson said 133 people had been evacuated from the badly damaged nursing home, but it was not immediately clear how many of them were hurt. He estimated that overall more than 100 people had been injured in the disaster. McNamara said much of the center of town had been evacuated, and that residences nearest the explosion had been flattened. There was no immediate official word on what sparked the explosion as emergency personnel assisted victims and doused the flames. U.S. Representative Bill Flores, whose district includes West, said he doubted any foul play was involved. “I would not expect sabotage by any stretch of the imagination,” he told CNN. A Texas public safety dispatcher in Waco told Reuters an initial explosion was followed by two smaller blasts, all of which erupted after a fire at the plant. He said there was concern a “second silo” at the plant could explode and that authorities were scrambling to evacuate the area around the facility. Cuts, burns, broken bones The air in town remained thick with smoke more than two hours after the explosion, and the area around the blast site was littered with shards of wood, bricks and glass. A Reuters reporter observed that a nearby middle school and several homes were severely burned. Dallas television station WFAA reported from helicopters that roughly a three-block area of West appeared to have been destroyed. Jason Shelton, 33, a father-of-two who lives less than a mile (1.6 km) from the plant, said he heard fire trucks heading toward the facility five minutes before the explosion. He said he felt the concussion from the blast as he stood on his front porch. “My windows started rattling and my kids screaming,” Shelton told Reuters. The screen door hit me in the forehead … and all the screens blew off my windows.” A column of smoke rises after an explosion at a fertilizer plant north of Waco, Texas .- Reuters Hillcrest Baptist Medical Center in Waco reported treating 66 patients, including children, for injuries including lacerations, burns and broken bones. “We are seeing a lot of lacerations and orthopedic-type injuries … things you would expect in an explosion,” said David Argueta, vice president of hospital operations. “We are being told that we have seen most of the patients, and it’s now turned into a search-and-rescue operation on scene,” he added. He said nine people suffering burns had been transferred to the Parkland Hospital in Dallas. A third hospital, Providence Health Center, reported receiving more than 30 patients from the disaster. Governor Rick Perry issued a statement saying his office had “mobilized state resources to help local authorities” deal with the incident. A White House official said the Obama administration was aware of the situation and monitoring local and state response through the Federal Emergency Management Agency. The explosion came two days before the 20th anniversary of a fire in Waco that engulfed a compound inhabited by David Koresh and his followers in the Branch Davidian sect, ending a siege by federal agents. Some 82 members of the sect and four federal agents died at Waco.