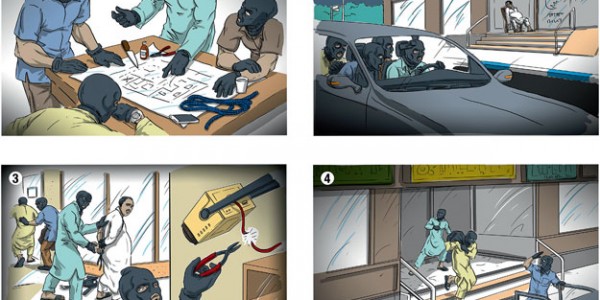 Gang of five robbers who target companies caught Staff Reporter / 12 June 2013 A gang of five Asians, who allegedly break in and burgle establishments at night, were arrested by Abu Dhabi Police on Friday in a sting operation code-named “Jerboas of the Dark”, due to the suspect’s attempts to avoid detection. The gang — comprising of several heavy-built members — specialised in robbing private industrial companies in Al Mafraq and Musaffah areas in the Capital. A combination of illustrations showing how the gang burgled company buildings. — Supplied photos The suspects would catch watchmen off guard, before binding them with rope and cutting the wires on the surveillance cameras, Director of the Criminal Investigation Department (CID) at ADP Colonel Dr Rashid Mohammad Bu Rasheed said. “The knife-armed and masked members of the gang managed to burgle company buildings and made off with cash, cooper metals and diesel, at amounts estimated at Dh1.8 million”, he noted. Col. Dr Bu Rasheed added that after a spate of reports were filed at the Operations Room of the CID, by companies working in the field of transportation, contracting and manufacturing of electric switch keys, a search and investigation team affiliated to the anti-organised crime division was formed to track down the perpetrators. The burglaries had been ongoing for the last two months. The efforts of the team resulted in a number of the suspects being captured, despite the lack of information in the case, he said, adding that the disconnection of the wires from the CCTV, among other precautionary measures, failed to allude them from the authorities. Upon interrogation, the perpetrators, H.G., 30, T. N., 25, A.H., 28, B.W., 25 and N.R., 26, all Pakistani, confessed to the robberies. They claimed they assigned the stronger members of the gang to holding the watchmen hostage. A quick-moving member of the gang was given the task of disconnecting the CCTV cameras, as well as keeping watch, while the remaining members started emptying the contents inside of the desk drawers and safes inside before fleeing the scene. Upon arrival at the targeted company, the members of the gang would knock on the door of the watchman’s room before hiding. “Once the watchman or the worker at the establishment opened the door to find out who was knocking…the members of the gang attacked him and beat him up”, he said, quoting the victims. After threatening to kill them at knife-point, they would then hand over the keys of the safes and stores to the gang, he said, noting that the gang later locked them up in a closed room after tying their hands and stealing their personal belongings. Col. Dr Bu Rasheed said the culprits used two motor vehicles during their crime spree — one saloon and one pickup — depending on the type of building they were targeting. They used the saloon car in limited thefts related to money, while the second vehicle was used in stealing and loading cooper and drums filled with diesel. Col. Dr Bu Rasheed said they gang were able to easily target these places as companies often hired untrained watchmen to guard the premises. The members of the gang, according to him, are on a legal residence working visa in the country, but practice burglary as a part-time money earner, noting that the gang had locked up 11 watchmen and workers (victims), in five separate burglaries. He further said that a number of the victims succeeded to untie the ropes from their hands and legs and inform the police, while some others were discovered tied-up the next day. Col. Dr Bu Rasheed said the police will keep a watchful eye and take action against any ill-minded persons who try to breach public order and break in to others’ properties. He urged the owners of the companies to ensure that the doors and windows of their companies are tightly locked when official working hours are over. He also advised them not to leave cash inside. He further warned the owners of the companies not to pose over-confidence in the employees of their establishments, and not inform them on the security measures and the valuables inside the company, as the culprits, when questioned, said that they had obtained information on the premises through word of mouth. He called on companies to sign contracts with security companies or delegate experienced employees for training to cope professionally with eventualities such as this, and not to rest on the company workers to perform security works. news@khaleejtimes.com Taylor Scott International