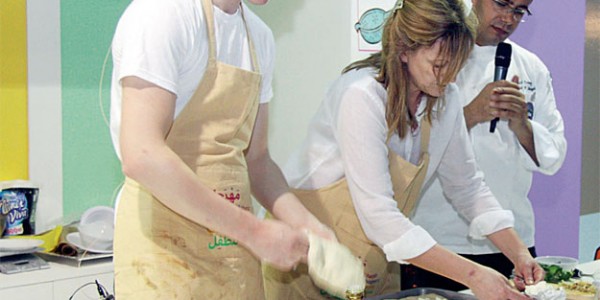 Food for thought at children’s reading festival Staff Reporter / 27 April 2013 A teenager, who has had his own bread shop since the age of 15, was on hand to delight children at the Sharjah Children’s Reading Festival cookery show. Seventeen-year-old British chef Jack Prince is one of the handful of chefs that have been taking part in the programme, most of whom are connected to youth. Along with his mother Rose Prince, Prince held an interactive ‘white pizza’ cooking demonstration, with those in the audience all too happy to get their hands dirty for the cause. Prince sells bread and soups from his bakery, The Pocket Bakery, in London’s Brixton market. There are other chefs from France, Jordan, Dubai and Lebanon on hand to coach those present into the culinary world, during the 12-day festival which ends on May 4. The aim during the 27 interactive cookery programmes running over the course of the festival is to create food that is both healthy and tasty, the organisers said in a press release. Meanwhile, children from the Al Noor Training Centre for Special Needs were guided through a drumming workshop filled with music, rhythm and lights by the Saltimbanco Italiano Global Art Theatre Company. “Visual and auditory input are very important when it comes to children with special needs. They love music, and as can be seen, they are following the instructions very well – which is usually not the case,” a teacher said. Some of the older children were also taught some basics of healthy eating. The Sharjah International Book Fair director Ahmed bin Rakkad Al Ameri said festival organisers had visited various schools across the UAE, including schools for special needs children and orphanages, and invited them to take part in the book fair. There is also a special focus on books for blind children, with a presentation by Reiner Delgado and Suzanne Sariyannus of German Federation of the Blind and Partially Sighted on books that can be both touched and read. Delgado himself is visually impaired. There will be a workshop on making tactile books at the festival on Sunday, from 11am to 1pm. A special panel of international authors and critics from around the Arabic and Western world discussed the power of reading in shaping children’s minds. news@khaleejtimes.com       Taylor Scott International