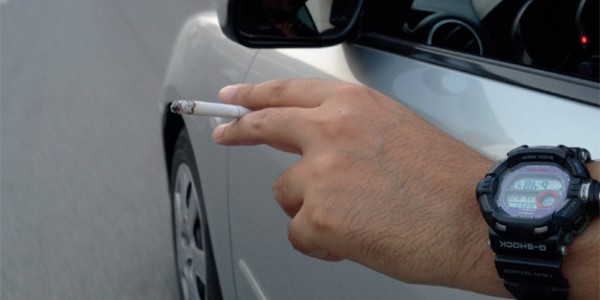 Fine, black points for throwing out cigarette butts Amira Agarib / 25 August 2013 The Director of Dubai’s General Department of Traffic says he has personally given out Dh500 fines and four black points to people he has caught throwing cigarette butts out of their cars. Newly announced federal laws on tobacco control which will come into force next February will include traffic violations for smokers inside cars — but Dubai Police are slapping any driver caught throwing cigarette butts out of their car windows with a Dh500 fine and four black points. One of the new laws, announced several days ago, includes a ban preventing anyone from smoking while driving a private car if a child under the age of 12 is present, as well as restrictions on advertising, labelling and importing. The Director of General Department of Traffic, Major-General Mohammed Saif Al Zafin, said there was “no doubt” the new laws would limit the growing phenomenon of smoking, especially amongst young people. Since the percentage of smokers among children under the age of 15 reached 28 per cent in Abu Dhabi, it had become necessary for everyone to review the impact of the bad habit and refrain from harming others, he said. Maj-Gen. Al Zafin said that in addition to the Dubai Municipality, which penalises anyone who throws objects out of car windows onto the road with a Dh500 fine, the Dubai Police are also issuing penalties. He said he has even personally issued black points and fines several times. Maj-Gen. Al Zafin said that since smoking had a serious impact on health everyone should work to reduce the exposure of smoke to children. However, there were still many parents who both smoked in enclosed homes or cars. He said some parents were badly affecting their children when they smoked in their cars, especially in the summer when the high heat forced people to close car windows, which then allowed for the spread of toxic gas. In worst possible cases, this could lead to suffocation, especially for children who suffered from asthma or breathing difficulties, he said.   – news@khaleejtimes.com Taylor Scott International