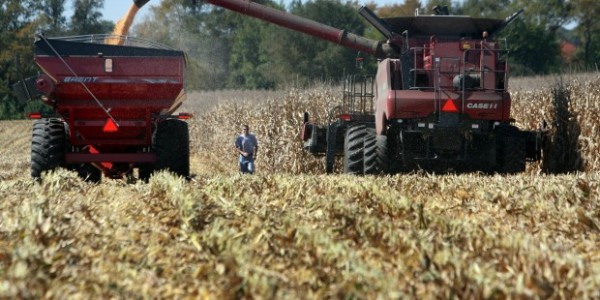 John Luke, The Times The Wietbrock family works to harvest corn last fall on their land near Lowell. Statewide farmland values have risen by as much as 19.1 percent over the last year, according to a recent Purdue University study. September 12, 2013 4:00 am  •   Joseph S. Pete joseph.pete@nwi.com, (219) 933-3316 Farmland values and cash rents have risen again this year, and Northwest Indiana has some of the highest prices in the state, according to a Purdue University study. Corn and soybean prices have recently started to wilt but had reached record highs after last year’s drought, causing farm incomes to shoot up. Higher prices drove up profits, and farmers also got insurance reimbursements for lost crops. The better-than-expected farm incomes, low interest rates and strong demand have helped push agricultural land values up by as much as 19.1 percent this year, compared to last year, the Purdue study found. Cash rents rose by 9.4 to 10.9 percent over the same period. “While the 2012 Indiana crop suffered from the worst drought since 1988, the increase in farmland values did not bother to slow down,” said Craig Dobbins, a Purdue Extension agricultural economist. The average price of an acre of top-quality farmland in Northern Indiana rose by 17.3 percent to $9,336 an acre in June, compared to $7,958 last June. Average and poor quality farmland increased by about 14 percent over the same period. The recent dip in corn and soybean prices may slow or stop the growth in land prices, and even cause slight declines in some areas. But the cost of farmland has been booming in recent years. Five years ago, a good tillable acre of Northwest Indiana farmland would have fetched around $5,000, said Gene Eldridge, a Porter County Realtor, who represents various types of real estate, including farmland. Today, the price has risen to an average of more than $9,300 per acre in the Northern part of the state, according to Purdue. “Crop prices are up, and the margins are there,” Eldridge said. “That drives up the price of the land, and what farmers are paying in cash rent.” Prices, however, may have peaked for now, unless corn prices hit a new plateau, said Craig Blume, regional vice president of Farm Credit Mid-America. Strong demand, bad weather and farmers who were willing to pay a premium for adjoining parcels drove up prices for the last few years. But lending caps have started to reach their upper limits, to the point where farmers would have to rely on income from land they already own free and clear to pay off purchases of more farmland, Blume said. “It’s stabilized,” he said. “It’s reached where it’s going to go for now.” Commercial development, which had been largely dormant during the downturn, accounted for part of the demand for land. “The transitional land market – that is, farmland moving out of agriculture – seems to have sprung back to life,” Dobins said. “This is a specialized market, with transitional land value strongly influenced by the planned use and location.” Cash rents grew to $310 an acre from $277 an acre last year for top-quality farmland in Northern Indiana, which is a gain of 11.9 percent. Rent prices grew more modestly for average and lower quality farmland, increasing by 7.1 to 8.1 percent over the last year. Researchers came up with the estimates after surveying more than 260 land appraisers, agricultural loan officers, farm managers, farmers and Farm Service Agency personnel. Taylor Scott International