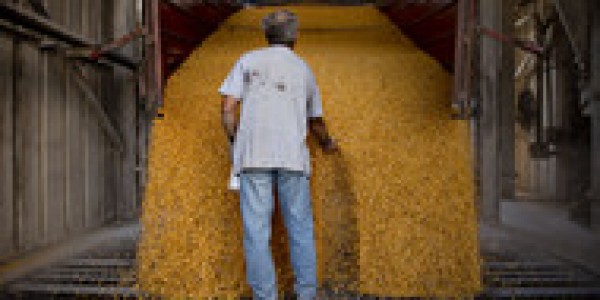 By Alan Bjerga – May 15, 2013 The U.S. House Agriculture Committee debated legislation today to reauthorize farm programs, a day after the Senate panel approved a version that will cost $955 billion over 10 years. The House measure, which proposes spending an estimated $940 billion, would cut $40 billion over the next decade by eliminating $20.5 billion from nutrition programs including food stamps , the biggest USDA program, $18.6 billion in farm subsidies and 4.8 billion in environmental programs, the Congressional Budget Office reported. Crop insurance, which is making record payouts after last year’s drought, would rise by $8.9 billion under the House measure. Enlarge image Senate and House committee leaders have said they’ll end a program that pays growers of corn, rice and other major crops regardless of market prices, and use some of the savings to insure revenues in less-profitable years. Photographer: Daniel Acker/Bloomberg “Farmers, ranchers and American taxpayers are counting on us to pass a farm bill,” said House Agriculture Committee Chairman Frank Lucas , an Oklahoma Republican. “This committee will mark up a reform-minded bill that was developed with true bipartisanship.” The House version, like the Senate’s, includes $6.4 billion in mandatory budget cuts known as sequestration that took effect March 1. Crop subsidies benefiting buyers such as Archer-Daniels-Midland Co. (ADM) and food stamps subsidizing purchases at Supervalu Inc. (SVU) are targets for lawmakers seeking to trim the deficit. Senate Action The full Senate will take up its version of the bill next week, said Senator Debbie Stabenow , the Michigan Democrat who heads that chamber’s committee. Lawmakers are seeking to pass a bill after failing to renew farm policy last year. The Senate passed legislation last year by a vote of 64-35 that included the first major reductions in farm aid since 1996. The measure died in the House, where Republican leaders wanted deeper cuts to food stamps. The current law, passed in 2008, was extended until Sept. 30. House Majority Leader Eric Cantor , Virginia Republican, said he plans floor action by August, giving both parties time to negotiate a final package before current law expires. The House committee today rejected an attempt to limit a revamp of dairy policies that would re-introduce supply management into the boom-and-bust milk market. Dairy Plan The Dairy Security Act, part of the committee’s draft, would subsidize insurance policies for producers to ease tight profit margins created by low milk prices and high feed costs. In return, farmers would agree to cut milk production once prices fall below a set limit. A producer in the program who ignored the agreement would receive less in government payments. Money saved would then be used to buy dairy products for distribution to the poor — another way to lower inventories. Small dairy producers say subsidies are needed to stabilize their boom-and-bust business. Groups representing companies including Dean Foods Co. (DF) say the market distortions would harm trade and consumers. Representative Robert Goodlatte, a Virginia Republican and former chairman of the committee, offered an amendment stripping the supply-management provisions from the bill. The proposed dairy language would “penalize both consumers and dairy producers who want to expand their operations,” Goodlatte said. Representative Collin Peterson of Minnesota, the committee’s top Democrat who crafted the program, said his proposal was a realistic way to deal with price swings. ‘Worst Interest’ “We’ve got to understand that we have to deal with milk, and if we have an oversupply, what do we do?” he asked. “Volatility is in the worst interest of the dairy producer.” The amendment failed 20-26. Both Senate and House committees plan to end a program that pays growers of corn, rice and other major crops regardless of market prices, and use some of the savings to insure revenues in less-profitable years. The House and Senate proposals would each also expand crop insurance and introduce some form of “shallow loss” protection for farmers with revenue reductions not covered by indemnities. Government-subsidized crop insurance sold by Wells Fargo & Co ., Ace Ltd. (ACE) and others have soared to records, galvanizing groups fighting for less farm aid. Indemnities for last year’s Corn Belt drought, the worst since the 1930s, are at $17.1 billion so far, according to the government. Distribution Disagreement In Senate committee debate yesterday, committee members differed on how payments should be distributed. Senator Pat Roberts of Kansas, the top Republican on the committee last year, disagreed with successor Thad Cochran of Mississippi over provisions setting floor prices for commodities, which were added this year to satisfy lawmakers from the South. It’s “beyond frustrating” the Senate last year passed a bill without target prices and is now approving “a rear-view bill” that continues obsolete policies and may bring challenges before the World Trade Organization , Roberts said. Under a recent trade case, the U.S. is paying $147 million a year to Brazilian cotton farmers in a temporary settlement of a case over U.S. policies that support the fiber. “The WTO stove is hot,” said Roberts, who voted against the bill. “We should not reach out to touch it again.” Republicans unsuccessfully sought larger cuts to food stamp funding. “The Americans who rely on” the aid “are not nameless, faceless people looking for a handout,” said Senator Kirsten Gillibrand of New York , the lone Democrat to oppose the bill. “They are children, hard-working adults, struggling seniors, veterans, active duty troops and the families that stand by them. That’s who suffers in this callous political fight.” To contact the reporters on this story: Alan Bjerga in Washington at abjerga@bloomberg.net Derek Wallbank in Washington at dwallbank@bloomberg.net To contact the editor responsible for this story: Jon Morgan at jmorgan97@bloomberg.net Taylor Scott International