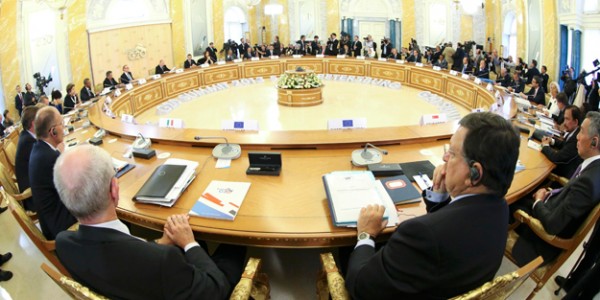 EU divided entering days of Syria talks (AP) / 6 September 2013 European Union nations enter high-octane talks on Syria as divided as ever, split between moral outrage over the use of chemical weapons and the obligations of slow and burdensome UN diplomacy. France, like the United States, is preparing possible armed action against the regime of Syrian President Bashar Al Assad. Britain has been surprisingly hamstrung by its parliament. And Germany says it will not take part in an attack and would limit itself to a backseat role at most. While EU leaders are in St. Petersburg with Russian leader Vladimir Putin and US President Barack Obama during the G-20 summit ending Friday, the EU’s foreign and defence ministers are meeting in nearby Lithuania through Saturday, seeking to broker a common stance that statements on Thursday indicated would prove elusive. Speaking in Russia, German Chancellor Angela Merkel said: “I do not believe yet that we will reach a joint position.” And while EU foreign policy chief Catherine Ashton cautiously said in Vilnius that she had been “of course, carefully talking with our colleagues and allies,” EU President Herman Van Rompuy — speaking in St Petersburg — bluntly insisted upon UN cooperation, upsetting the French and widening divisions further. Rebuffing French urgency, Van Rompuy told reporters that EU nations had to underscore “the need to move forward with addressing the Syrian crisis through the UN process.” That involves further delays as UN inspectors prepare a report on the August 21 chemical attack and the diplomatic quagmire at the Security Council, where Russia and China have veto power over military action. By invoking UN approval, Van Rompuy appeared to be isolating France, the lone EU member actively looking at military intervention. French President Francois Hollande came to the G-20 summit in hopes of rallying other European countries to support military action, if not with warplanes then at least with logistical or other symbolic help. Van Rompuy’s comments echoed those of Merkel — and upset the summit’s French contingent. French Defence Minister Jean-Yves Le Drian held bilateral meetings with several EU counterparts in Vilnius on Thursday, aiming to make them fully aware of the “unacceptable nature” of the chemical weapons attack, an official in his office said. He was pushing for tough language against Syria in a statement expected from Ashton on the crisis in coming days. On Saturday, US Secretary John Kerry will be coming to Vilnius to confer with his EU counterparts for a tougher stance against Assad. The US said it has proof that the Assad regime is behind attacks that Washington claims killed at least 1,429 people, including more than 400 children. Obama, however, finds himself slowed on taking action as he seeks congressional authorisation for the use of force in a vote expected after Congress returns to work September 9. British Prime Minister David Cameron stunningly lost such a parliamentary vote on military action last week, strongly reducing any chance of a US-British alliance such as the one that dominated the Iraq war a decade ago. Now, Cameron is on the defensive as he faces world leaders in St. Petersburg. In the face of such problems, Nato Secretary-General Anders Fogh Rasmussen urged “the international community to overcome its divisions.” “Not to act would send a dangerous signal to dictators all over the world that they can use chemical and maybe other weapons of mass destruction without any reaction from the international community,” Rasmussen said. Taylor Scott International