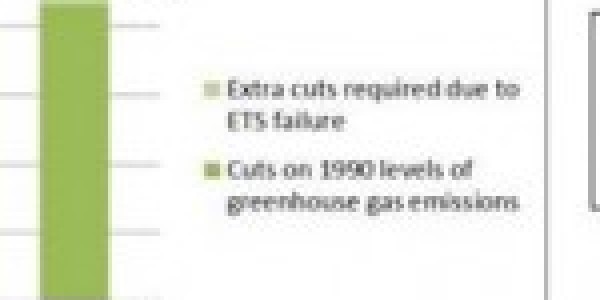 June 12, 2013 click to enlarge A surplus of Emissions Trading Scheme (ETS) carbon permits will require  the European Union to cut emissions by an extra 7 percentage points to meet its 2030 climate goals, according to a report by environmental research company Ecofys. The report, the Next Step in Europe’s Climate Action: Setting Targets for 2030 , finds any future emissions reduction goals will have to take into account the effects of the current carbon permit surplus in the ETS, the largest global carbon market. The EU’s emissions reductions should be around 49 percent compared to 1990 levels, Ecofys says in the report. The EU has a binding target to cut greenhouse gas emissions by 20 percent in 2020 from 1990 levels. The European Commission, the EU’s regulatory arm, said in a paper published in March the 27-nation bloc should cut emissions 40 percent in 2030. Greenpeace has called on the EU to cut carbon emissions by at least 55 percent in 2030, a goal which takes into account Ecofys’ 49 percent figure plus the additional 7 percentage points required to deal with the glut of carbon permits. The ETS has struggled to maintain the value of carbon permits . The ETS saw the estimated carbon price drop 49 percent to €5.82 ($7.73) per metric ton in 2012, down from €11.45 ($15.21) per metric ton in 2011. The glut of permits pushed carbon prices to a record low of €2.46 ($3.25) per metric ton in April. Analysts have cautioned about carbon prices in Europe inching closer to zero unless policymakers take action, either through backloading or some form of long-term structural change. Last month, European carbon prices rebounded after German Chancellor Angela Merkel said the EU should take action on a plan to postpone the supply of permits. The European Commission is scheduled to hold a new vote June 19 on the temporary carbon market fix. Taylor Scott International