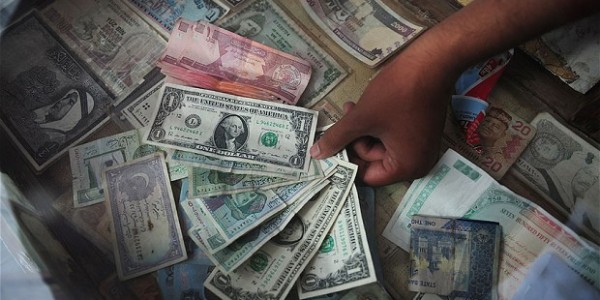 The $9 trillion (£5.8 trillion) accumulation of foreign bonds by the rising powers of Asia, Latin America and the emerging world risks going into reverse as one country after another is forced to liquidate holdings to shore up its currency, threatening to inflict a credit shock on the global economy. Fears of Fed tightening have pushed borrowing costs worldwide to levels that could threaten global recovery Photo: AFP By Ambrose Evans-Pritchard 8:38PM BST 22 Aug 2013 India’s rupee and Turkey’s lira both crashed to record lows on Thursday following the US Federal Reserve releasing minutes which signalled a wind-down of quantitative easing as soon as next month. Dilma Rousseff, Brazil’s president, held an emergency meeting on Thursday with her top economic officials to halt the real’s slide after it hit a five-year low against the dollar. The central bank chief, Alexandre Tombini, cancelled his trip to the Fed’s Jackson Hole conclave in order “to monitor market activity” amid reports Brazil is preparing direct intervention to stem capital flight. The country has so far relied on futures contracts to defend the real – disguising the erosion of Brazil’s $374bn reserves – but this has failed to deter speculators. “They are moving currency intervention off balance sheet, but the net position is deteriorating all the time,” said Danske Bank’s Lars Christensen. A string of countries have been burning foreign reserves to defend exchange rates, with holdings down 8pc in Ecuador, 6pc in Kazakhstan and Kuwait, and 5.5pc in Indonesia in July alone. Turkey’s reserves have dropped 15pc this year. “Emerging markets are in the eye of the storm,” said Stephen Jen at SLJ Macro Partners. “Their currencies are in grave danger. These things always overshoot.” It was Fed tightening and a rising dollar that set off Latin America’s crisis in the early 1980s and East Asia’s crisis in the mid-1990s. Both episodes were contained, though not easily. Emerging markets have stronger shock absorbers today and largely borrow in their own currencies, making them less vulnerable to a dollar squeeze. However, they now make up half the world economy and are big enough to set off a crisis in the West. Fears of Fed tightening have pushed borrowing costs worldwide to levels that could threaten global recovery. Yields on 10-year bonds jumped 47 basis points to 12.29pc in Brazil on Thursday, 33 points to 9.72pc in Turkey, and 12 points to 8.4pc in South Africa. There had been hopes that the Fed might delay its tapering of bond purchases, chastened by the jump in long-term rates in the US itself. Ten-year US yields – the world’s benchmark price of money – have soared from 1.6pc to 2.9pc since early May. Hans Redeker from Morgan Stanley said a “negative feedback loop” is taking hold as emerging markets are forced to impose austerity and sell reserves to shore up their currencies, the exact opposite of what happened over the past decade as they built up a vast war chest of US and European bonds. The effect of the reserve build-up by China and others was to compress global bond yields, leading to property bubbles and equity booms in the West. The reversal of this process could be painful. “China sold $20bn of US Treasuries in June and others are doing the same thing. We think this is driving up US yields, and German yields are rising even faster,” said Mr Redeker. “This has major implications for the world. The US may be strong to enough to withstand higher rates, but we are not sure about Europe. Our worry is that a sell-off in reserves may push rates to levels that are unjustified for the global economy as a whole, if it has not happened already.” Sovereign bond strategist Nicolas Spiro said India is “caught between the Scylla of faltering growth and the Charybdis of currency depreciation” as hostile markets start to pick off any country with a large current account deficit. He said India’s central bank is playing with fire by reversing its tightening measures to fend off recession. It has instead set off a full-blown currency crisis that is crippling for companies with dollar debts. India is not alone. A string of countries across the world are grappling with variants of the same problem, forced to pick their poison. Taylor Scott International